Who is who in the clouds, part 2

SCALABILITY
If security is the biggest obstacle, scalability is the strongest driving force in the development of cloud computing. Scaling up immediately from a handful of users to many and vice versa would normally require multiple servers to be idle most of the time. It is not just ineffective, it is truly ruinous. Even with virtualization, supporting highly dynamic applications requires additional physical resources. Google over time has shown excellent results in scaling across several data centers and deservedly occupies the first line of the rating from developers. The Google App Engine uses master / slave replication between data centers. This approach was chosen by Google in order to provide low-latency recording, high data consistency, enhanced data center reliability and fault tolerance. Notice how wide the gap is between Google and Amazon. Together with forecasts for the development of solutions for the coming year, insufficient scalability compared with Google may become a problem for Amazon in the competition in the field of public clouds.

RELIABILITY / UPTIME
Another obstacle to using the clouds is the fear that the service provider's servers or communication equipment will fail, or for some other reason, the vendor will not be able to service the cloud for some time. For some or all users, this will mean the inability to work.

It is understandable why developers consider this a serious obstacle. As in the case of security, the likelihood of problems is not so great, and in any case, in the "native" data centers, catastrophic failures occur no less often than with providers. However, there is a question of control. Own systems can be constantly monitored and backed up. When using cloud solutions, reliability becomes a matter of trust in the supplier.

Effective use of Google numerous data centers gives developers such confidence (Fig. 5). IBM is the second in the list of reliability, with a small margin from it, Amazon closes the first three. AT&T, which offers 99.9% availability SLA, has not yet been particularly encouraging to developers - perhaps due to recent market entry. 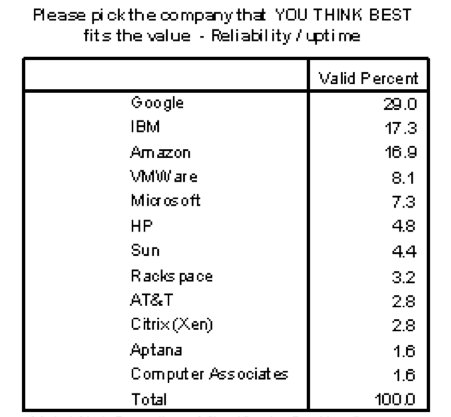 WAITING TIME
Cloud infrastructure services offer rapidly scalable architectures that can support internal applications without burdening their own corporate resources and increasing response time. But this promise of much greater productivity is weakened when it comes to demanding high performance and time-consuming transfer of massive amounts of data to the cloud computing environment. The latency parameter significantly affects the efficiency of cloud services, and if latency exceeds certain limits, then this leads to the rejection of cloud services by customers. 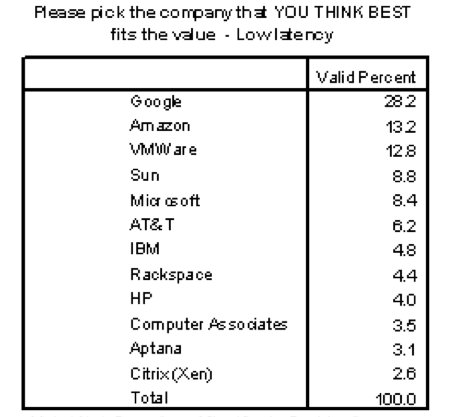 Fig. 6 demonstrates that the solutions of the two leaders in the cloud computing market are perceived by developers as having the least latency. Both Amazon and Google were initially Internet companies that have proven successful in an environment for which fast response is a key parameter. Therefore, developers and consider them the best by this criterion.

AT&T received higher scores for the wait time criterion than for the rest due to its powerful network capabilities.

VENDOR INDEPENDENCE
Independence from the vendor, although not as fundamental as security or reliability, is still an important factor in evaluating the cloud offering. A binding to the vendor occurs, for example, if the provider of the “platform as a service” offers such a development environment that the applications created in it will work only on this platform. This is, for example, the case of Salesforce. Dependence can also arise if the vendor offers development tools that provide the creation of applications that work with only one hypervisor, or if the proposed database has a proprietary structure that does not allow the correct export of data. Dependence on the vendor can be a serious problem, since it limits the customer's capabilities in the long run. Despite the fact that you should be worried about the proprietary structure of the Big Table database from Google, the developers are nevertheless quite sure that Google will not bind them to their technologies. A rather strange result of the survey is the low ratings of AT&T and IBM by the criterion of openness. In fact, both companies build their cloud services on open technologies that provide low or zero vendor dependency.

PRICE-QUALITY RATIO
The cloud computing market is new and highly competitive, and most public cloud services practically do not differ in price. The cost of private cloud implementations varies from project to project. Because of this, it is impossible to single out one vendor, which is objectively better in price / quality, and the differentiator in this paragraph of the survey is more likely a subjective perception of quality than price. In the perception of developers, Google shines against the background of all other companies in terms of the value provided. The reason for this may be the fact that Google has been freely distributing open source tools to developers for many years. In addition, a business model based on the sale of advertising, not products, allowed Google to provide developers with substantial engineering resources for working on Google platforms and with the company's tools for free. This is definitely a good model to get high price / quality ratings from developers.

Brief conclusions
Despite the fact that most suppliers declare their intentions to promote both public and private cloud infrastructures, in reality these are so far two significantly different markets, with different leaders. Amazon, the pioneer of the public cloud market, now shares leadership with Google. At the same time, from the point of view of developers, Google demonstrates greater potential, and plans for the development of Google solutions are more thorough than for competitor solutions. Google is likely to lead the public cloud industry.

In the field of private clouds, IBM has already clearly gained leadership and is in the strongest position, which in the future will allow it to maintain a dominant position in this segment. This is especially true when it comes to large corporations, which are most often already customers of IBM, as well as those companies for which the reliability and security of the solution are of paramount importance. IBM, with its impeccable reputation in the corporate environment, offers private clouds built behind the client’s firewall, as well as the implementation of clouds of the same level and manageability as public solutions, but without the inherent security problems of public clouds. IBM also offers pre-integrated cloud computing equipment to facilitate the deployment and configuration of private clouds.

The two companies that are at the crossroads of public and private clouds, AT&T and Microsoft, have great potential. In the case of AT&T, due to the existing physical infrastructure, and in the case of MS, due to the developed network of developers and well-known software capabilities. However, both companies were somewhat late for distribution, and this is a significant drawback for a player in the market that is developing so rapidly.

Janel Garvin is the founder of Evans Data Corp and an analyst for cloud computing, concurrent programming, and development tools.

In the course of reading and translating, several cursory considerations arose:

- The survey was conducted even before the incident with Sidekick, which, in my opinion, revealed another hefty problem of cloud computing - relatively speaking, the problem of holes in the provider’s business processes. Broken backup and lack of double-triple redundancy, staff reduction or lack of training in working with hardware and software of third companies and other crap that opened up after this data loss is stronger than Goethe's Faust. If they had been interviewed after this scandal, Microsoft’s estimates would have been much lower, but that’s not the point, MS in this sense is completely unique, the mess is flourishing in many places. It turns out that it will be necessary to strictly certify cloud providers for the quality of business processes, although this is not a guarantee of anything, of course.

- Indeed, it is very strange that IBM on vendor independence gave such estimates. If you look at their Development and Test on the IBM Cloud , then there is SUSE, Rational, which is all on top of Eclipse, Informix Dynamic Server DE, with which you can write for Amazon EC2, for example, without any problems. It’s quite interoperable.

- Sun just before the sale rolled out a very interesting cloud solution. It is unfortunate that now, because of all this bootleg with a merger, they have missed this market.