We present new data from the study of the series “Social Networks in Russia Today: Figures, Trends, Forecasts,” for the second half of 2014. This is the fifth regular publication of relevant data on the penetration of social media by region of Russia, a demographic analysis of the authors of messages and the degree of their activity, as well as by levels of positive in various social media. For the first time, the study presents data on the social network Instagram.

It should be noted that for the first time for the entire period of research according to TNS data, there has been a slight decrease in the monthly audience of the social networks Odnoklassniki, My World and LiveJournal.

The first place in popularity among social networks, as before, is VKontakte, whose attendance in November 2014 increased to 54.6 million people., the second place is occupied by Odnoklassniki with a monthly audience of 40.1 million people . 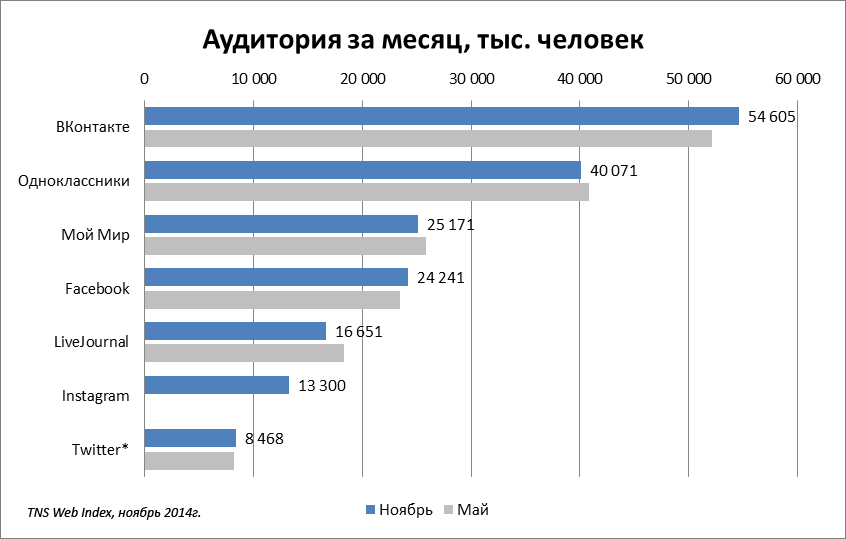 * Data on Twitter is extrapolated based on the audience for the day and week. The

following research shows data on “talking” users who openly express their position by public messages on social media. In December 2014, there were over 35 million such active authors in Russia who generate more than 40 million messages per day. Active authors creating public content make social networks an actual indicator of public moods, allowing them to catch “live” social problems at the very beginning of the formation of significant trends.

Number of public posts and authors

It is worth noting that six months ago, VKontakte took the first place in the number of published content, which in Russia traditionally takes over some of the functions that Twitter performs in the world - the exchange of short status messages. However, by the end of the year, Twitter remained the leader in the volume of content with a slight margin. 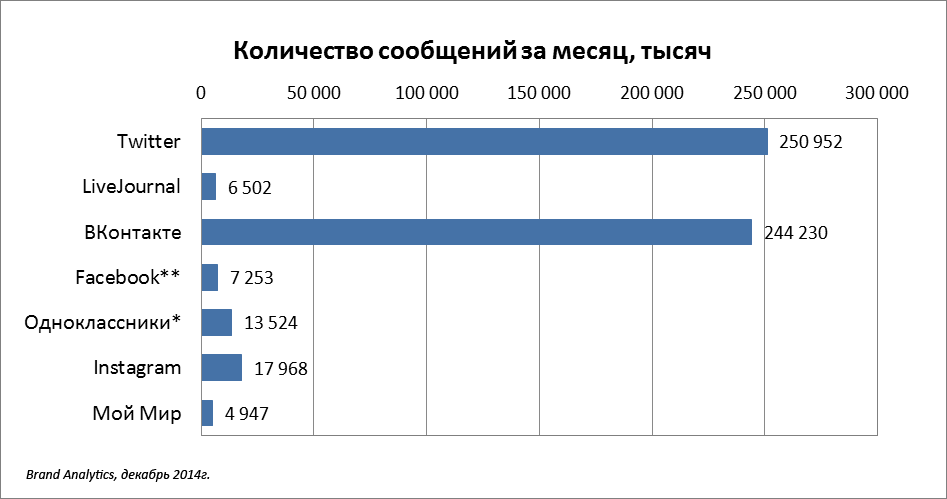 VKontakte is the leader in terms of the number of "writing" Russian authors, with 23.8 million unique authors ahead of the competition. The next in second place Instagram - only 2.7 million authors. 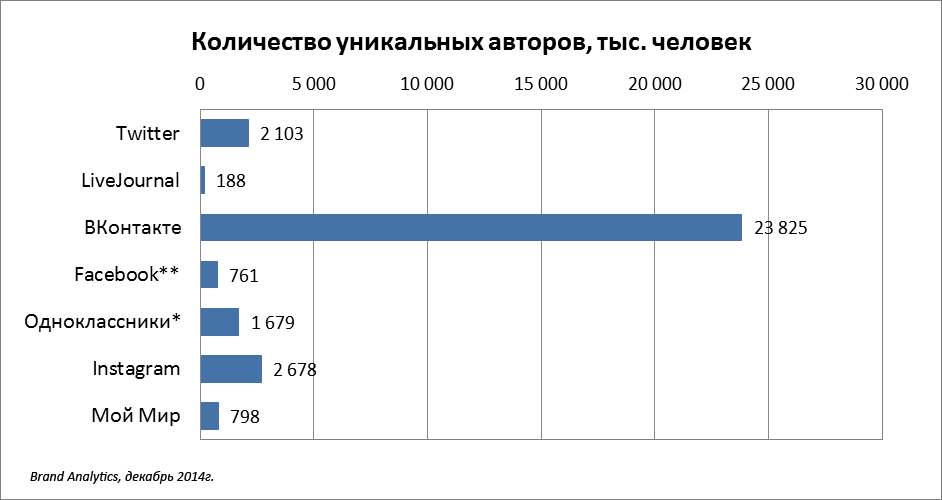 Twitter leads in terms of engagement - 119.3 posts per month per active author. In second place for this indicator - LiveJournal - 34.6 posts. The rest of the social networks show very close results: from 10.3 on VKontakte, to 6.2 on the My Mir network.

Gender of authors ** The

gender structure of VKontakte authors has not changed, compared to May data and is within the margin of error (0.1%). 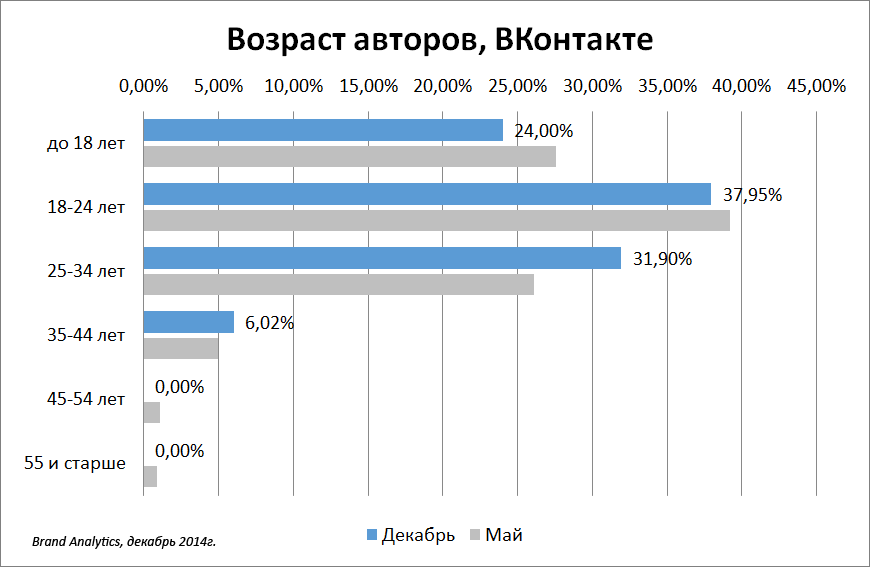 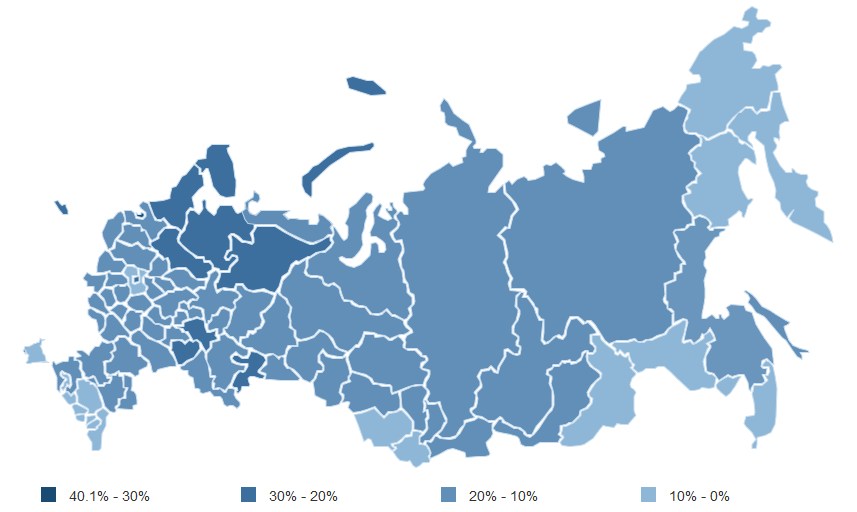 Classmates, as before, remain mainly a platform for interpersonal communication. The monthly audience * of the network is 40 million people , while only 1.7 million authors demonstrate public activity in groups .

In Odnoklassniki, the share of female audience increased even more - by 7%. 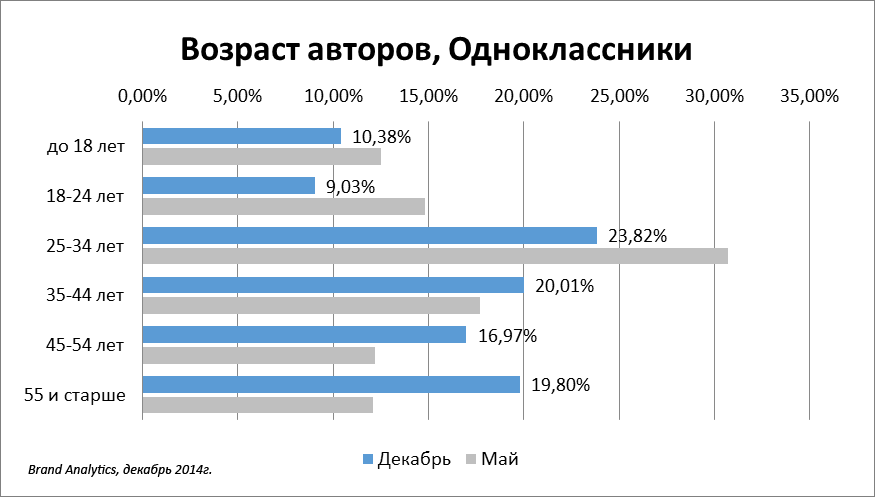 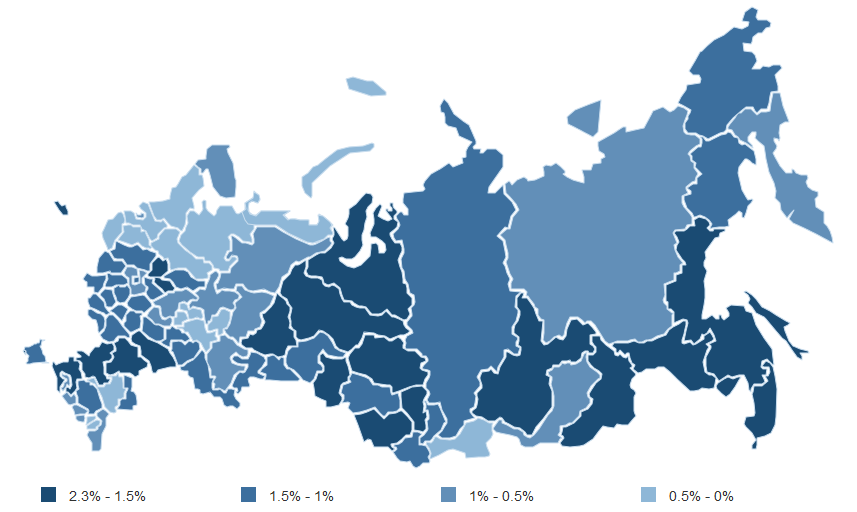 Classmates are traditionally more popular in the regions of Russia, in first place in terms of penetration, as before, the Sakhalin Oblast, Khabarovsk and Zabaykalsky Krais.

A December study showed a serious drop in user activity on the My World network compared to summer data. So, according to November data, the monthly audience of the network * was 25.1 million people , and the number of active authors in December was only 0.8 million people .

Gender of the authors ** The

gender structure of My World has not changed, the proportion of men has increased by 1.3% compared with May data. 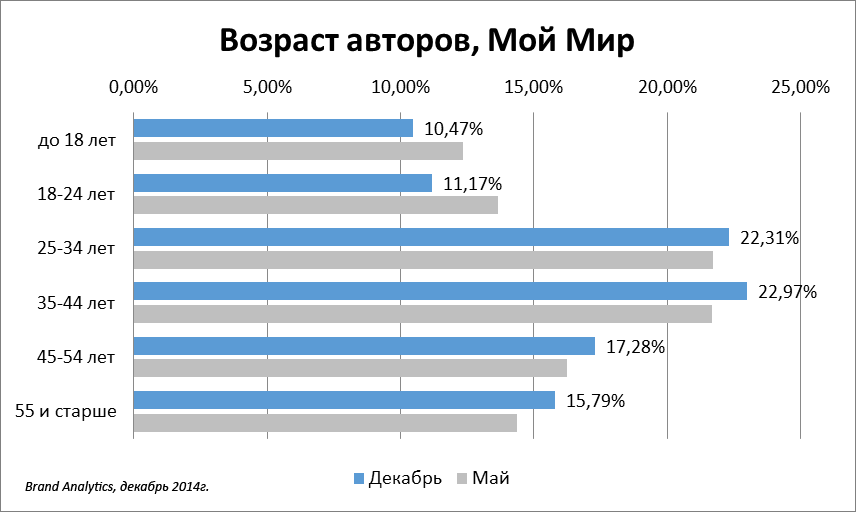 The age structure of the authors in My World has practically not changed. The number of authors under the age of 18 and from 18 to 24 years old decreased by 2% and 3%, respectively. In all groups older than 25 years, the number increased by 1-2%. 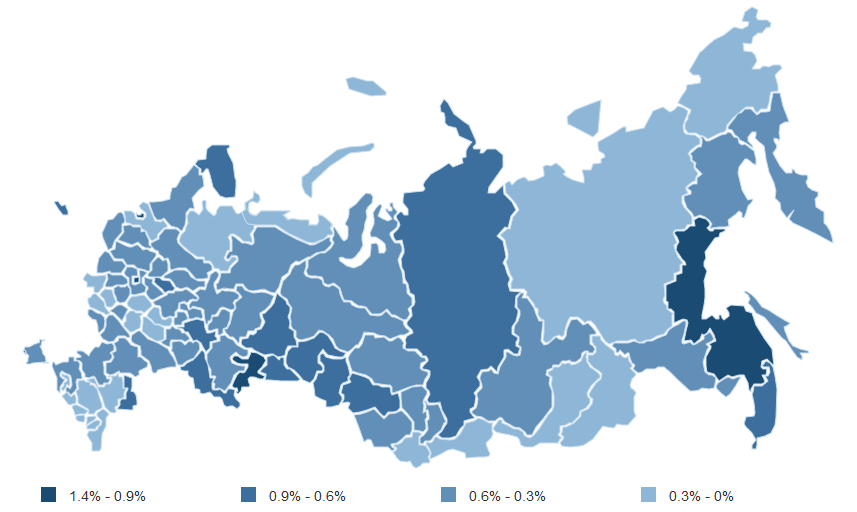 The top 5 regions in terms of penetration practically did not change, but the share of the authors of My World among the population decreased significantly. The Chelyabinsk region is in the lead in the ranking, and if in May 4.22% of its residents showed public activity in My World, then in December their share was only 1.39%.

On Facebook, the activity of the authors is consistently low. According to the results of November measurements, the monthly audience * of the network amounted to 24.2 million people , the number of active authors in December - 0.8 million people .

Gender of authors ** The

gender distribution of Facebook authors has not changed compared to May. 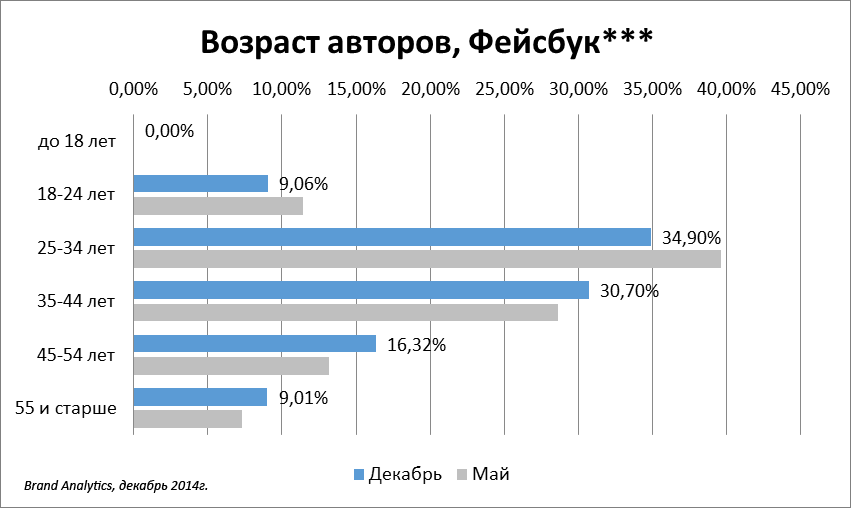 *** according to the rules of Facebook, a person can be at least 18 years old.

On Facebook, the most noticeable changes occurred in the group of authors in the range 34 - 44 years old - their number decreased by 10%. At the same time, the proportion of authors aged 25 to 34 years and from 45 to 54 years increased significantly by 6% and 3%, respectively. The number of authors older than 55 years increased by 2%. 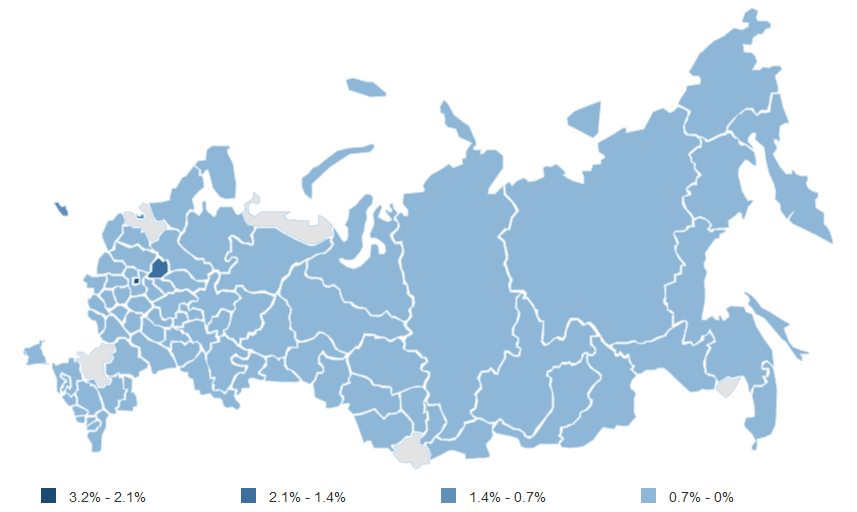 LiveJournal remains a platform for fans to “read, not talk”: out of 16.7 million people a monthly audience *, only 188 thousand authors are active .

The number of active male LJ authors increased by 2.5%. It is worth noting that LJ is still the only popular social network with a predominance of male audience. 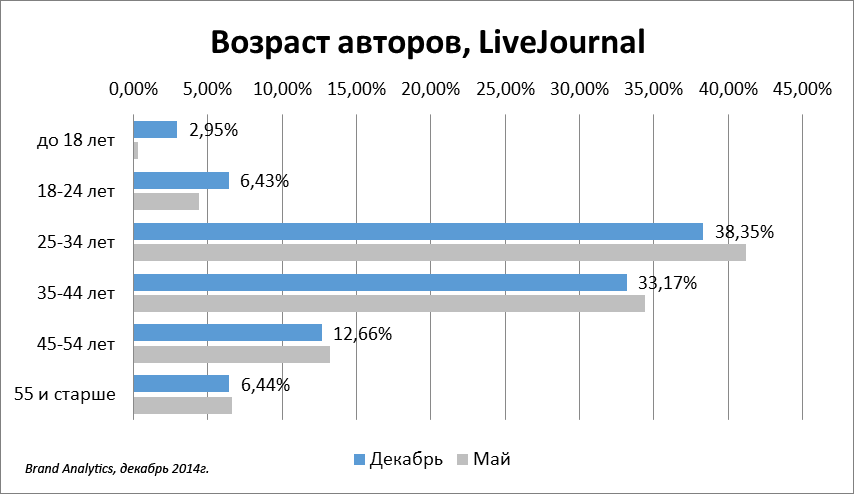 LiveJournal is the only social network that has become younger in the last 6 months: almost 3% of authors under 18 years old, 2.5% more authors from 18 to 24 years old, 4% less authors from 35 to 44 years old and in the remaining age groups, the number of authors decreased on average by 2%.

Among the active Instagram authors, the vast majority - 70.6% are female audiences. Despite the predominance of the fair sex in all social networks, Instagram is the undisputed leader in this indicator.

There are no data on the age of active authors on Instagram. 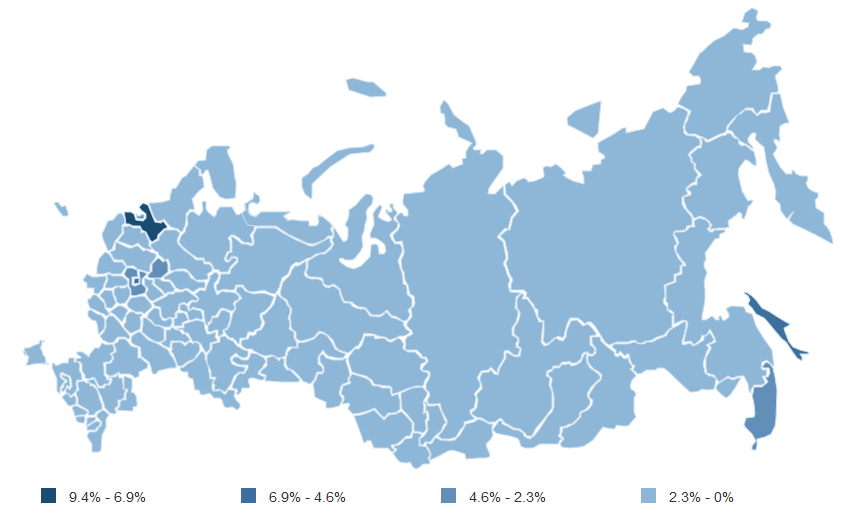 In terms of Instagram penetration, the leaders are the Leningrad Region, Moscow, Sakhalin and Moscow Regions. Instagram is participating in the study for the first time, so we can’t talk about the dynamics so far, the dynamics will appear in our next regular studies.

Twitter has significantly slowed down, but nonetheless continues to grow. In November, the audience * of the resource amounted to 8.5 million people , and the number of active authors - 2.1 million people .

Gender of Authors ** There is 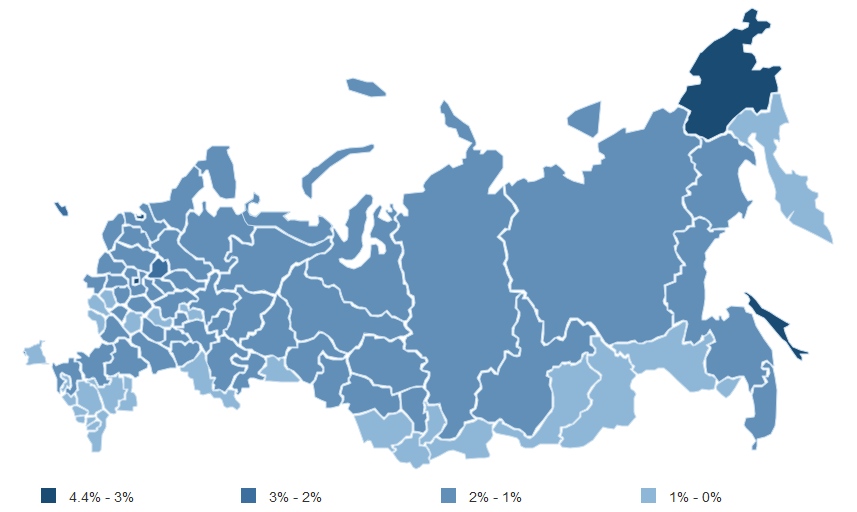 By the level of Twitter penetration into the regions of Russia, the previous leaders of the rating - St. Petersburg and Moscow practically did not change their shares, but lost their places in the rating due to the increase in the number of residents of the Sakhalin Region and Chukotka Autonomous Region who became leaders in the rating.

Comparison of the socio-demographic characteristics of the authors

The youngest social network is Vkontakte. Here the minimum number of active authors over 44 years old, authors over 35 - only 6%. The core of the active audience falls on authors aged 18 to 34 years.

The most adult network is Odnoklassniki: authors under 25 years old only 19%, the core of the active audience is 24-44 years old and almost 20% are users over 54 years old. 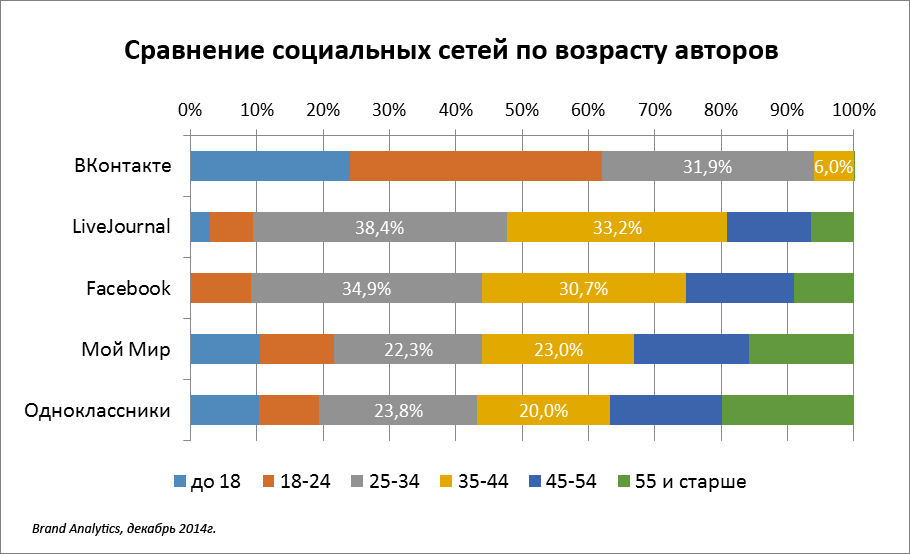 Regarding the gender distribution of active authors, women predominate in almost all social networks. Instagram and Odnoklassniki are leading - 50.6% and 50.2% respectively. The only exception is LiveJournal, in which, although not by much, there are more men than women - 55.8%. 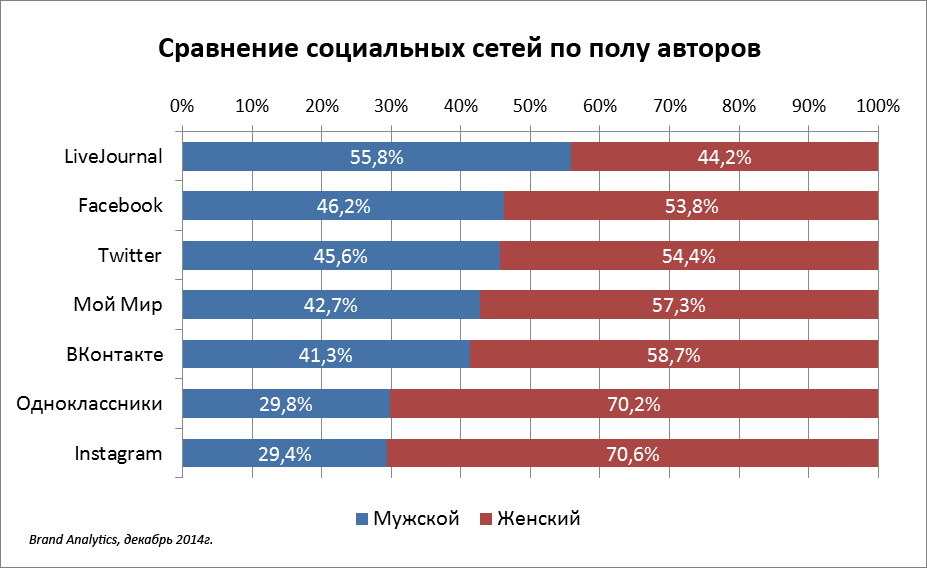 Positive and negative in social networks 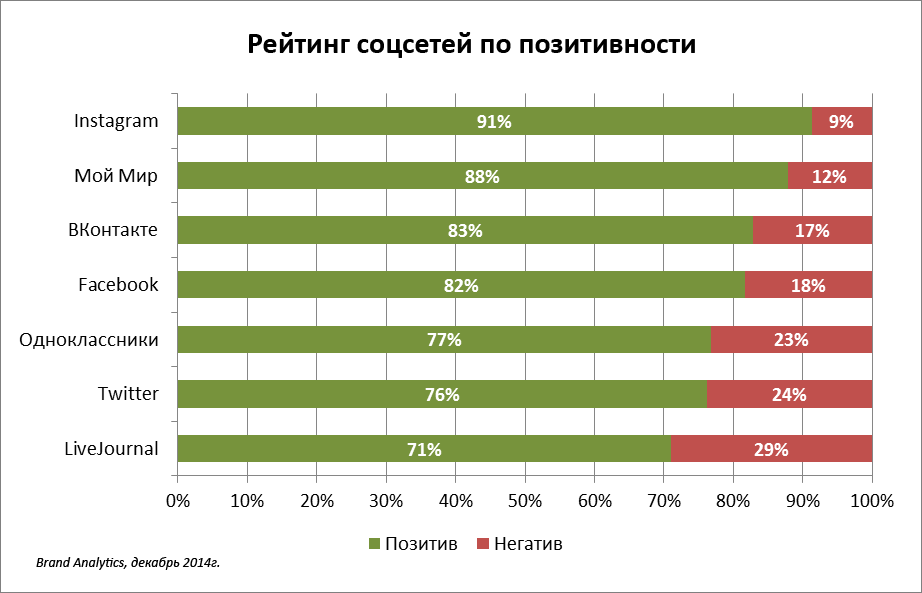