The U.S. UFO Secret Program has also been researching wormholes and extra dimensions.

Hello, Habr! I present to you the translation of the article “The Government's Secret UFO Program Funded Research on Wormholes and Extra Dimensions” by Sarah Emerson. The U.S. Department of Defense sponsored wormhole research, the creation of invisibility, and “manipulation of extra dimensions” under the auspices of the Modern Airspace Threat Detection Program , which was first mentioned in 2017 by the New York Times and Washington Post.

In January 2019, the U.S. Department of Defense Intelligence released a list of 38 research topics that were part of this program. This happened at the request of Stephen Aftergood, director of the Government Secrets Tracking Project, Federation of American Scientists, who used the Freedom of Information Act .

The Pentagon’s UFO-related research projects are most fully represented on the list.abnormal aviation threats . ”After Aftergood’s request, a document marked“ For Official Use Only ”was sent to the US Congress in January 2018. 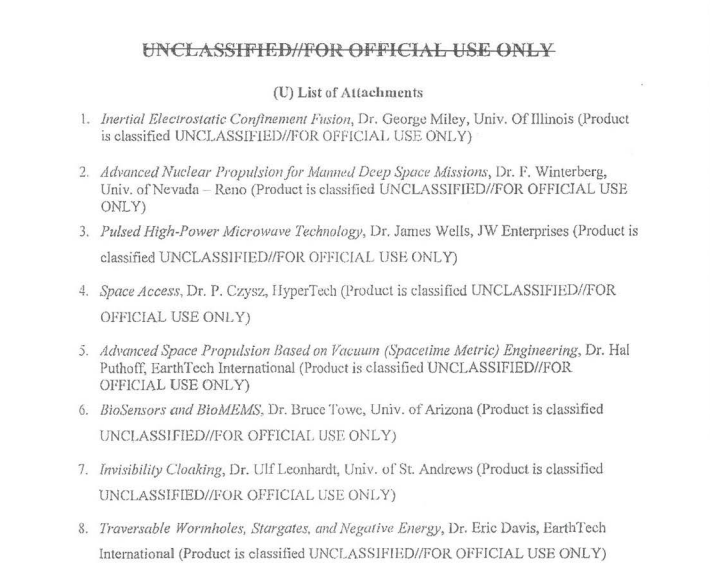 One of the research topics,“ Travel-friendly Wormholes, Stargate, and Negative Energy, ”was led by Earth Davie International's Eric Davis Inc, which is described as an enterprise “exploring the advanced frontiers of science and engineering,” and interested in theories of space-time, the study of quantum vacuum, and the search for extraterrestrial civilizations.

Another project, “cover e invisibility, ”developed under the supervision of German scientist Ulf Leonhart , professor at the Weizmann Institute of Israel. Leonhart’s research deals with theoretical quantum optics, and in 2006Nature magazine cited his work on the theoretical possibility of creating "an invisible hole in space in which objects can be hidden."

Another project, “The Warp Engine, Dark Energy, and Manipulation of Extra Dimensions,” refers to theoretical physicist Richard Obousi, director of the nonprofit organization Icarus Interstellar, which claims to be “researching technologies that will allow breakthroughs in interstellar travel.” Gizmodo wrote in 2009 that Obouzy was able to create a “scientifically accurate warp ship design” that, hypothetically, can travel in space using dark energy.

“This list of research papers gives us more information than we had about this strange program,” Aftergood wrote to the email. “Now we have a better idea of ​​what the US Department of Defense Intelligence Agency did and what it gave out.”

Other items look mysterious and foggy, because their essence is described by a single line of text. One mentions “metal glasses” and may be attributed to the experimental type of flexible metal alloy, and the topic “biomaterials” may repeat the low-gravity biotechnology research sponsored by NASA .

But although the Pentagon’s paper is full of hypothetical ideas better suited for science fiction, this program was more than just a UFO hunt.

The Ministry of Defense did not openly acknowledge the existence of the program until newspaper reports revealed it. She " was mostly financed at the request of Harry Reid", who was then the leader of the majority in the Senate, and from 2007 to 2012 they spent $ 22 million on it.

We don’t know how exactly the choice of projects included in the program was made.

“I think that anyone who reads these headlines will start scratching their heads and wondering what the US Department of Defense Intelligence Agency generally thought,” Aftergood said. “People start to deal with such topics when they have more money than ideas about where to put them.”

According to the New York Times, most of the program’s budget went to Bigelow Aerospace, a Nevada-based company owned by Raid’s old friend and UFO hunter Robert Bigelow, the hero of the documentary Hunting for the Skinwalker . The film tells about the Skinwalker ranch , famous as one of America’s most paranormal places, which was later bought by businessman and billionaire Bigelow.

The first hints of the existence of this program were made by Luis Elizondo, a military intelligence official who managed the program for seven years. When he resigned, he sent a request to publish filming meetings with UFOs. These videos were subsequently published by the New York Times and the Washington Post. At that time, Reid was trying to strengthen the secrecy associated with the discoveries made by the program.

The agency claims that the "Program for identifying modern threats to airspace" was closed due to lack of funding, but Elizondo says that she continues to study meetings with UFOs.

In a Pentagon brief report for 2009, the then program director argued that "what used to be science fiction is now a scientific fact."

“When I was younger, I loved science fiction,” Aftergood said. - Today I like a good government. Therefore, all of this was not particularly pleasing to me. ”