The declared phenomenal characteristics of 10–12 dBi for a double square and 16–17 dBi for a triple square excited the minds of the Soviet amateur radio community and for many decades predetermined the tremendous success of such antennas on CF and UHF: the descriptions of these antennas wandered from book to book, from magazine to magazine . Thousands of Soviet citizens repeated them.
Although these characteristics are greatly exaggerated, they were still based on the publications of reputable researchers: Sam Leslie (W5DQV, 1955 publication), Dick Bird (G4ZU), Rothammel (with reference to Leslie and Bird).

In 1962, Vladimir Pavlovich Sheiko-Vvedensky (UB5CI) published a book “Antennas of amateur radio stations” in the publishing house DOSAAF where there are also references to 13 dBi from a double square.

A large abundance of authoritative sources determined that Sotnikov’s incorrect conclusions were popular even in 2018.

Referring to Sam Amateur Leslie (Oklahoma, W5DQV, publishing the results of extensive experiments with 1955 squares), and Dick Byrd (G4ZU, England), the dual square antennas in these bands have a directivity of 10 to 13 dBi (8 to 11 dBd)

Simulation in 4NEC2 with the ground (Sommerfeld-Norton real earth mode) fully confirms these observations: with a moderate conductance of earth, you can get 12.4 dBi, and with a perfect conductor of 13.8 dBi with an antenna suspension height of 1λ.

It should be noted that in the experiments of Leslie and Byrd, the dBd measurement was not made relative to the actually constructed dipole, but by measuring the field strength at a certain distance, at a known power in the TX antenna and comparing the measured intensity with the calculated by Friis formula.

The fact is that the usual Hertz dipole, which has 2.13 dBi, with a suspension height of 1λ per HF, forms a double-lobe DN with a maximum of 8.2 dBi. Those. the dipole itself at the expense of the earth takes precedence over 6.1 dBd

. Leslie and Byrd's measurements are relative to an imaginary 2.13 dBi dipole, rather than alternately switching the “double square” antenna and the dipole. 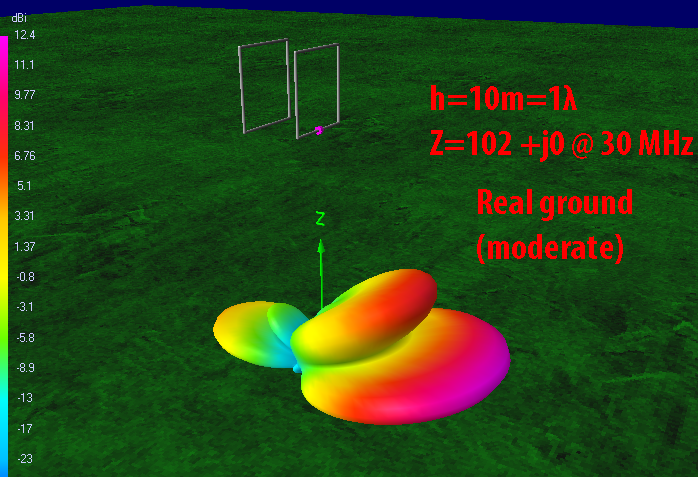 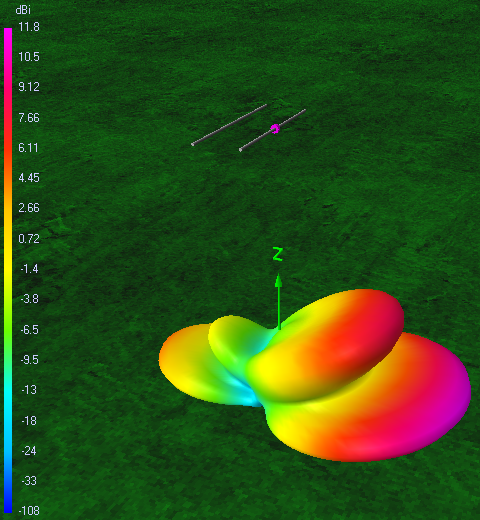 Since there are no antennas in HF in free space, the methodology and the obtained data are completely relevant and have practical application. Measurement of these antennas in free space on HF is impossible. 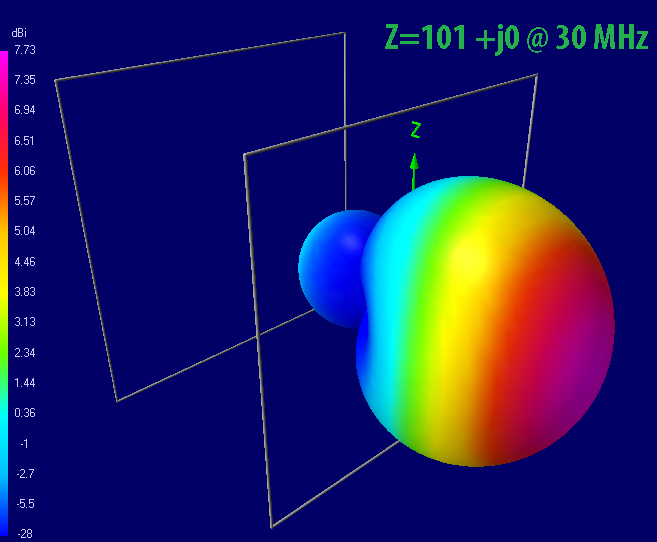 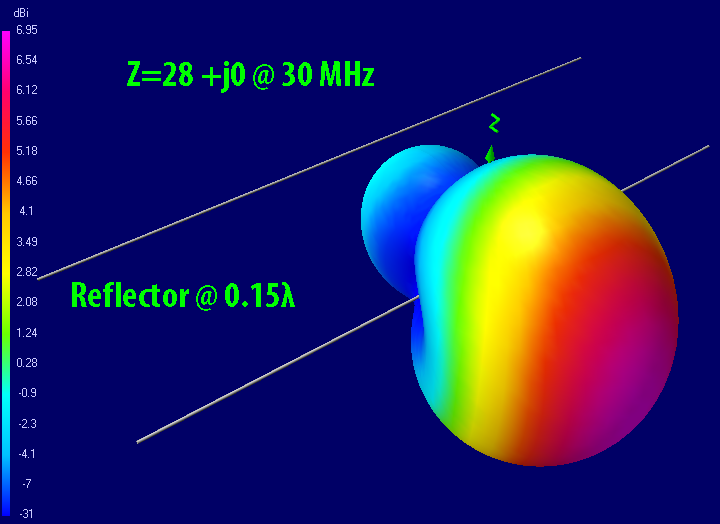 In 1962, in the DOSAAF publishing house, a radio amateur from Kharkov, Vladimir Pavlovich Sheiko-Vvedensky (UB5CI) publishes the book “Antennas of Amateur Radio Stations”. In this antenna "double square" are described in the chapter "HF antenna". Sheiko gives a completely correct description of the principle of operation - “a system of two anti-phase excited quarter-wave horizontal emitters”.

In the chapter “VHF antennas” Sheyko mentions such antennas, although he does not recommend them. Sheiko says about the directional properties: “The following data on the gain of frame antennas is known: a double square - 9-11 dB (8-13 times), a triple square 14-15 dB (25-32 times).

If these data are given for free space, then they contradict the data in the previous chapter on HF antennas, because there will be much more with the ground. If these data are given taking into account the earth (extrapolating the directivity to HF), then the ground does not work on VHF as an endless flat conductor, as described in detail in Goncharenko’s book “ Chapter 12.1.2 Land on VHF ”

But the 2-storey HEADLIGHT is excited in phase - on each floor the direction of the currents is the same. In the frame antenna, on different floors, currents flow in antiphase, this is described in the book of Rothammel and Sheiko, and follows from simple conclusions - the length of the horizontal and vertical parts of each arm is λ / 2, so the current flows in antiphase on the upper floor.

With a decrease in the width of the loop and an increase in height, the resistance Ra decreases, and the shape of the DN varies very little. If the width tends to zero, and the height to λ / 2, we get a transmission line with a length of λ / 2 short-circuited at the end. Ra such line is 0.

Depending on the ratio of height / width and shape of the frame - Ra can be obtained from 0 to 300 Ohms. With a square frame with λ / 4 side length, the resistance is about 135-140 ohms, and the bottom has a maximum forward / backward of 3.48 dBi (1.35 dBd). Any other shapes are possible - round frame, triangular, “dumbbell”, “parachute” and even irregular shapes. 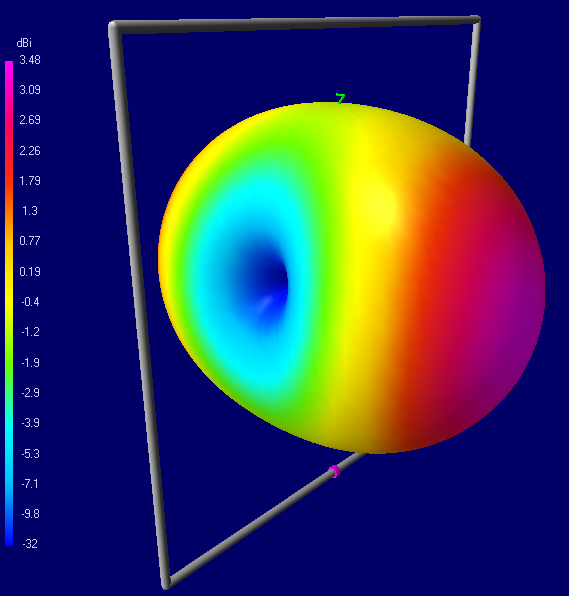 In addition to repeatedly overestimated data on the directivity of squares on VHF, Sotnikov gives incorrect data both in size (a very large slip in resonance) and in radiation resistance and matching.

In the sizes given for the 12th MW channel (222-230 MHz) from a 6 mm bar, the resonance occurs at a frequency of 242 MHz (HFSS) and 245 MHz (4NEC2). Ra = 150 ohms and 167 ohms, respectively.
To connect such an antenna to the 75 Ohm transmission line, it is necessary to manufacture a balancing matching device (SSU, balun) 2: 1. When connected through a 1: 1 balun, even at the resonant frequency, the CWS cannot be less than 2. At frequencies below the resonant, Ra drops sharply and negative (capacitive) reactivity increases.

Ku at the resonant frequency of 7.19 dBi (HFSS) and 6.67 dBi (NEC2). The shape of the main and side lobes in different programs is almost identical. 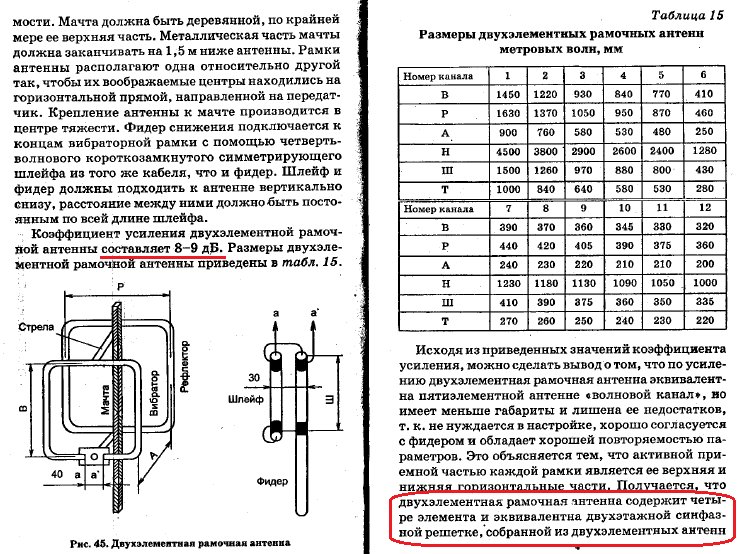 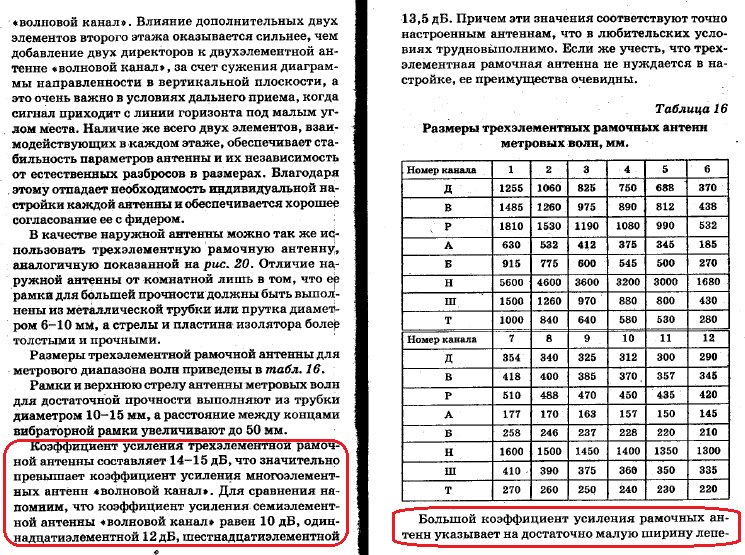 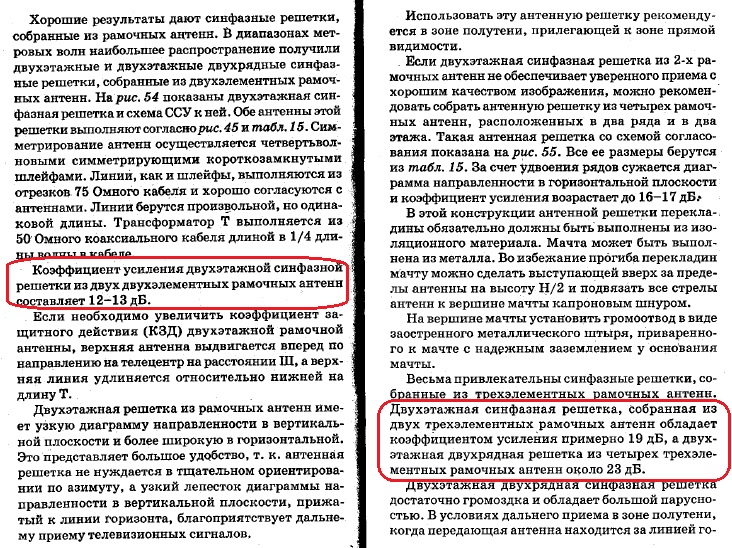 Simulation results for the 12th MV channel in HFSS and 4NEC2 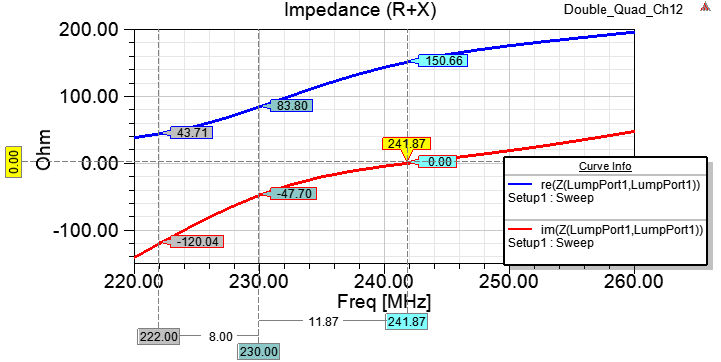 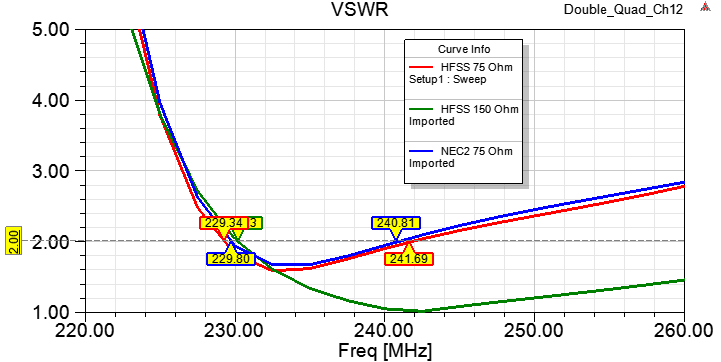 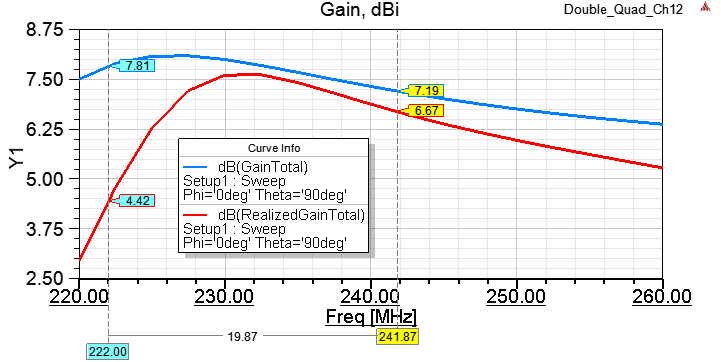 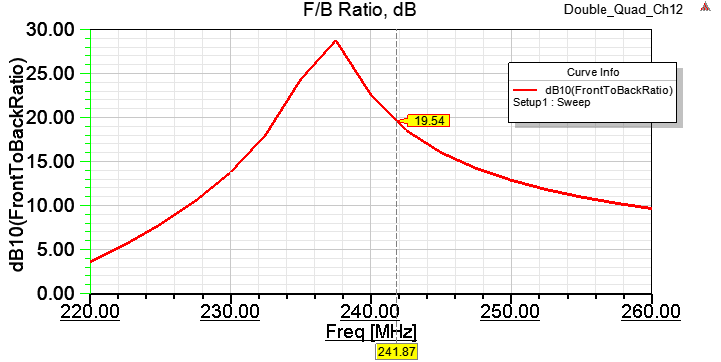 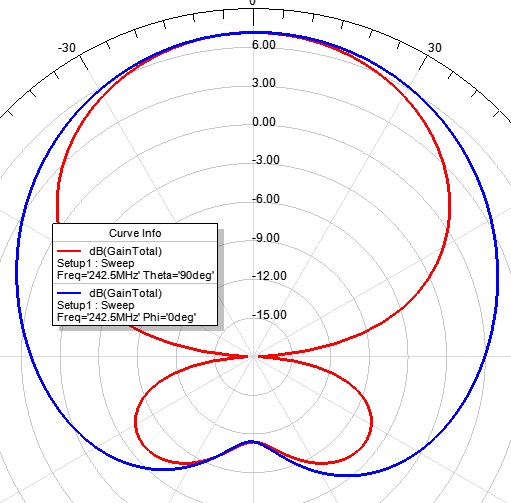 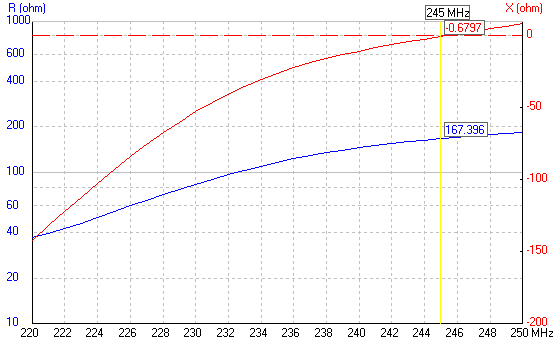 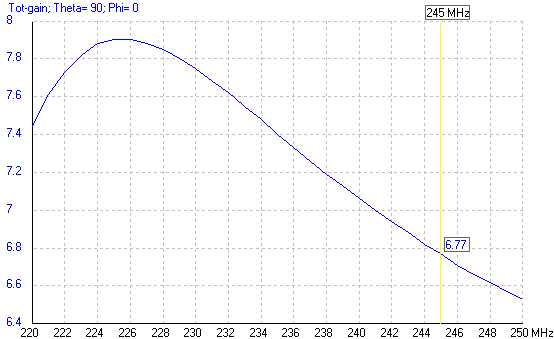 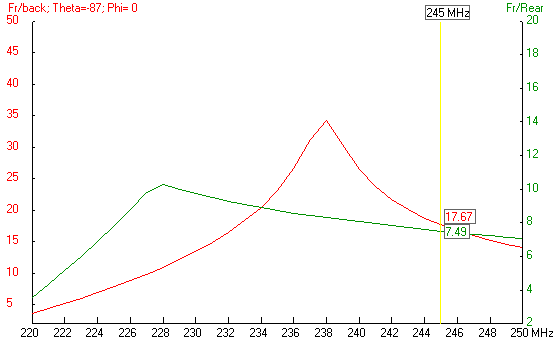 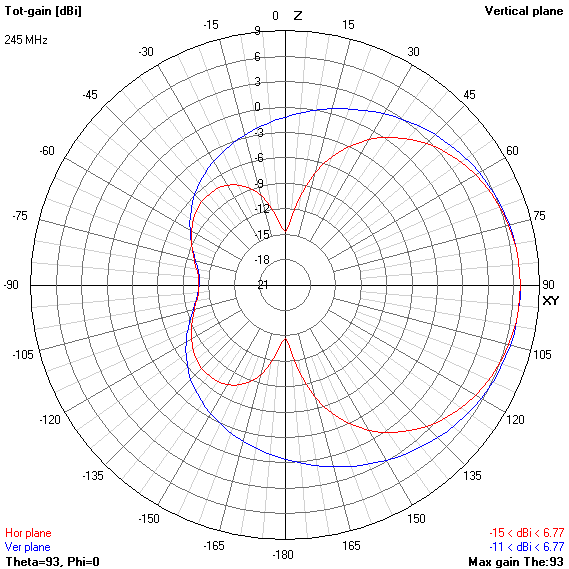 At the request of the user REPISOT, we will analyze the possibility of using square antennas for the decimeter range of television broadcasting. 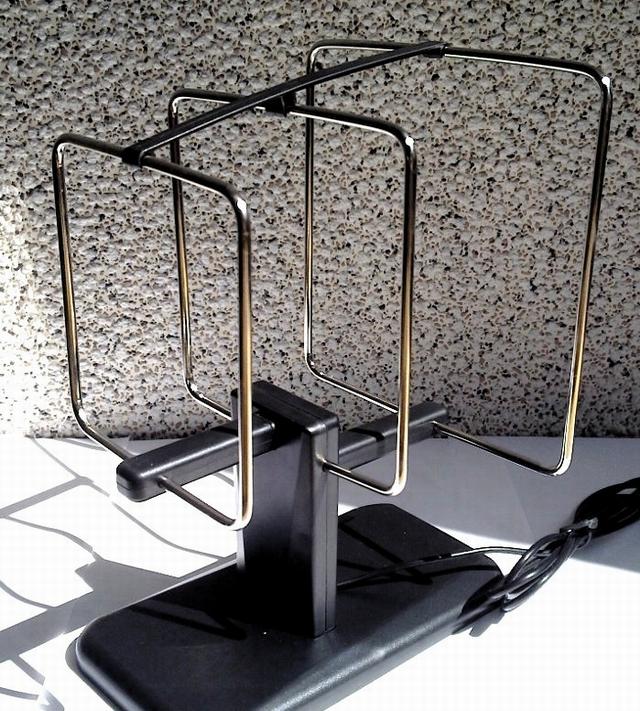 Let's perform a simplified simulation in HFSS (without plastic spacers and without rounding the corners, this will slightly shift the resonant frequency, but we are not interested in the exact value now) . The director frame has a gap of 1 mm.

extremely difficult to manufacture an SSH 2: 1 at UHF, therefore the manufacturer did not even try.

The antenna is completed with a printed equivalent of a half-wave loop, which works as a 4: 1 transformer, but only when the electrical length of the loop is L / 2. Such an SSU is, by definition, narrowband (single-channel). With a load of 75 Ohms, the input resistance of such SSU is 300 Ohms. But the manufacturer equipped the antenna with a 50 Ohm cable (although the TVs and tuners are all 75 Ohms). Perhaps the manufacturer considered that 200 is closer to 150 than 300, and in order to reduce reflection on the border, the antenna <-> cable donated an additional reflection on the border of the cable <-> TV.

With a load of 75 Ohms (a quarter-wave transformer, as in Sotnikov's circuits), the antenna is strongly mismatched everywhere, but in a narrow section of 577-608 MHz, the CWS drops to 2.

Such an antenna, by complexity, exceeds the 3-wave Wave-1 wave channel with a retail value of $ 3.5 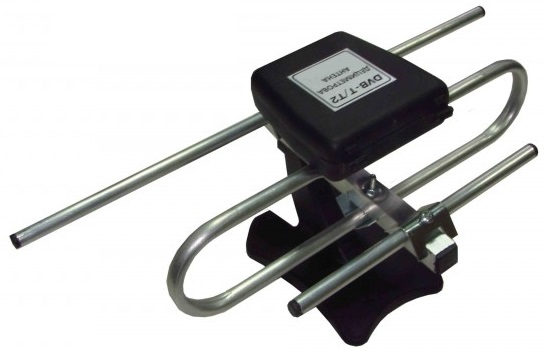 A and by electrical characteristics loses much