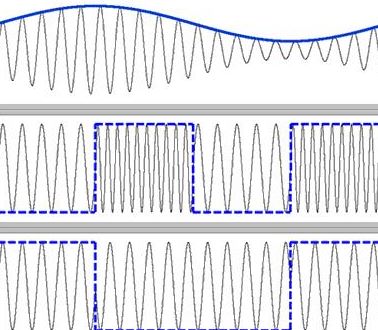 We continue a series of general educational articles under the general title "Theory of Radio Waves."
In previous articles, we met with radio waves and antennas:

Let's take a closer look at the modulation of the radio signal.

In the framework of this article, analog modulation of the following types will be considered:

With amplitude modulation, the envelope of the amplitudes of the carrier wave changes according to a law that coincides with the law of the transmitted message. The frequency and phase of the carrier oscillation does not change. 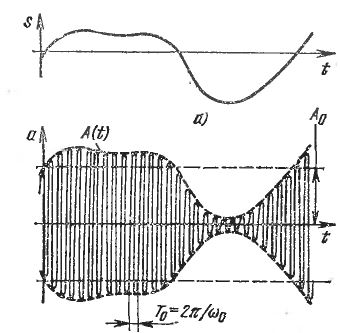 spectrum This spectrum is characteristic of a modulating oscillation of a constant frequency.

On the graph, the x-axis represents the frequency, the y-axis represents the amplitude.
For AM, in addition to the amplitude of the fundamental frequency located in the center, the amplitudes to the right and left of the carrier frequency are also presented. These are the so-called left and right side stripes. They are spaced from the carrier frequency at a distance equal to the modulation frequency.
The distance from the left to the right sideband is called the width of the spectrum .
In the normal case, with a modulation factor <= 1, the sideband amplitudes are less than or equal to half the carrier amplitude.
Useful information is contained only in the upper or lower side bands of the spectrum. The main spectral component is the carrier; it does not carry useful information. The power of the transmitter with amplitude modulation is mostly spent on "air heating", due to the lack of information of the main element of the spectrum.

Amplitude modulation with one sideband

Due to the inefficiency of classical amplitude modulation, amplitude modulation with one sideband was invented.
Its essence is to remove from the spectrum of the carrier and one of the side bands, while all the necessary information is transmitted along the remaining side band. But in its pure form in domestic broadcasting, this species did not take root, because the receiver needs to synthesize the carrier with very high accuracy. Used in compaction equipment and amateur radio.
In broadcasting, AM with one sideband and a partially suppressed carrier is most often used: With this modulation, the quality / efficiency ratio is best achieved.

A type of analog modulation in which the carrier frequency changes according to the law of the modulating low-frequency signal. The amplitude remains constant. a) is the carrier frequency, b) a modulating signal, c) the result of modulation.

The greatest deviation of the frequency from the average value is called deviation .
Ideally, the deviation should be directly proportional to the amplitude of the modulating oscillation.

The spectrum with frequency modulation is as follows:

It consists of a carrier and harmonics of the side-band harmonics left and right symmetrically behind it, at a frequency multiple of the frequency of the modulating oscillation.
This spectrum represents harmonic oscillation. In the case of real modulation, the spectrum has a more complex shape.
Distinguish between broadband and narrowband FM modulation.
In broadband, the frequency spectrum significantly exceeds the frequency of the modulating signal. It is used in FM broadcasting.
In radio stations, narrow-band FM modulation is used mainly, which requires more accurate tuning of the receiver and, accordingly, is more protected from interference.
Broadband and narrowband FM spectra are presented below.

The narrow-band FM spectrum resembles amplitude modulation, but if we take into account the phase of the sidebands, it turns out that these waves have a constant amplitude and a variable frequency, rather than a constant frequency and a variable amplitude (AM). With broadband FM, the amplitude of the carrier can be very small, which makes the FM highly efficient; this means that most of the transmitted energy is contained in the side frequencies that carry information.

The main advantages of FM, over AM are energy efficiency and noise immunity.

As a type of FM, Line-frequency modulation is distinguished.
Its essence lies in the fact that the frequency of the carrier signal varies linearly. The practical significance of linear-frequency-modulated (LFM) signals lies in the possibility of significant compression of the signal during reception with an increase in its amplitude over the noise level.
LFMs are used in radar.

In reality, the term phase manipulation is used more, because mainly modulate discrete signals.
The meaning of the FM is that the phase of the carrier changes abruptly, when the next discrete signal arrives, different from the previous one.

From the spectrum you can see the almost complete absence of the carrier, which indicates high energy efficiency.
The disadvantage of this modulation is that an error in one character can lead to incorrect reception of all subsequent ones.

In the case of this modulation, the phase does not change with every change in the value of the modulating pulse, but with a change in the difference. In this example, with the arrival of each "1". The advantage of this type of modulation is that in the event of a random error in one character, this does not entail a further chain of errors.

It is worth noting that there are also phase manipulations such as quadrature, where phase changes within 90 degrees and higher order FMs are used, but their consideration is beyond the scope of this article.

PS: I want to once again note that the purpose of the articles is not to replace the textbook, but to tell "on the fingers" about the basics of radio.
Only the main types of modulations are considered to create a reader's understanding of the topic.