For many years, Veeam has been releasing products for virtual environments only. But lately we were constantly asked: “When will something appear for physical machines?” Having analyzed user requests and our development opportunities in this direction, we released Veeam Agent for Microsoft Windows (formerly known as Veeam Endpoint Backup FREE ). By the way, in the near future version 2.0 will be released, in which many interesting features will be presented.

Today we are pleased to present the first official version of Veeam Agent for Linux ! Veeam Agent for Linux protects Linux-based physical machines deployed locally or in the public cloud. The tool is stand-alone; it does not require Veeam Backup & Replication installation (although it can use Veeam Backup & Replication repositories as the target storage). What is Veeam Agent for Linux ?

Veeam Agent for Linux is a tool for backing up Linux physical systems (workstations, servers, and machines in the public cloud). The general description can be seen in our post on Habré: " Acquaintance with Veeam Agent for Linux ". The product creates a backup at the image level and saves the data to a VBK file (the same as Veeam Backup & Replication and Veeam Agent for Microsoft Windows ). Veeam Agent for Linux uses its own driver to take volume snapshots and track modified data blocks (CBTs). The driver allows you to get information about the changed data blocks without rescan the whole machine - an indispensable thing for incremental backups.

So, you have installed the product. What's next? Veeam Agent for Linux offers two operating modes - using the step-by-step UI wizard and through the command line.

To start the wizard, open a command shell and use the command:

If you have already worked with Veeam Agent for Microsoft Windows , the backup process will be familiar to you: If you need fine-tuning or you want to create your own scripts to automate the installation of the solution and perform backup tasks, there is a command line.

Start with the command: To create a backup task, use the command:

And then specify the desired job parameters. 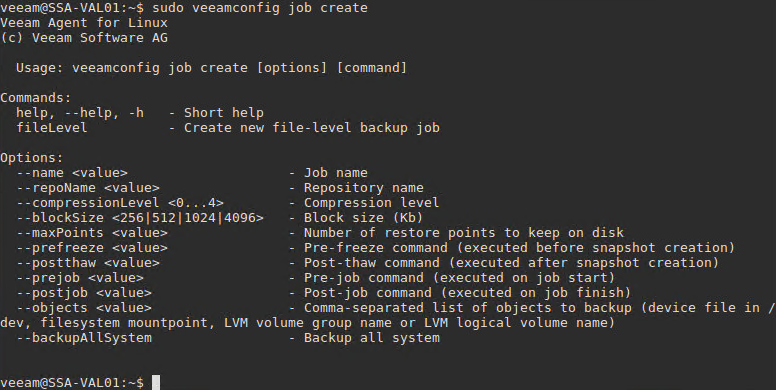 As you can see in the screenshot, using the command line you can configure parameters that are not available in the UI wizard, for example, compressionLevel and blockSize . To recover files, simply start Veeam Agent for Linux UI and select the Recover Files command . The contents of the backup will be mounted in the system as a folder, and you can get the necessary files using any file manager.

Veeam Agent for Linux also comes with recovery media, which will help restore data at any level: bare metal, at the volume or file level. Veeam Agent for Linux is available in three editions: Free , Workstation and Server .

Free Edition is a great solution for home use and protection of non-critical production systems. It offers basic features: volume snapshots and the use of CBT, all backup and restore modes (via the UI and command line), as well as integration with Veeam Backup & Replication.

A key feature of the Workstation edition is enterprise-level support 24.7.365 (in addition to the features of the free version).

Server Edition is the most advanced version. Includes the ability to run pre-freeze and post-thaw scripts and configure multiple backup jobs.

Posts about Veeam Agent for Linux :