Increasing the efficiency of photosynthesis by genetic modification of plants

Photosynthesis directly or indirectly provides energy to almost all living beings on the planet. All green plants, algae, and microorganisms use the same mechanism for producing glucose from water and carbon dioxide under the action of sunlight. However, the efficiency of photosynthesis is low: in glucose and other products of photosynthesis, usually 1-2% of the energy of incident light is stored.

Partly the inefficiency of photosynthesis is due to the fact that photosynthesis appeared more than two billion years ago, when there was no oxygen in the Earth’s atmosphere. Because of this, when fixing carbon dioxide, a key enzyme (named RuBisCO) makes an error in about one of four cases, and instead of carbon dioxide, the reaction occurs with oxygen. This process is called photorespiration and lowers the efficiency of photosynthesis and the productivity of crops by almost half.

There are several ways to overcome photorespiration. You can remove oxygen from the atmosphere and replace it with carbon dioxide, which is done by mankind by burning fossil fuels. However, this process (to put it mildly) leads to many side effects and does not provide a complete solution to the problem of photorespiration. Another solution is to use plants that can create an atmosphere rich in carbon dioxide inside photosynthesizing cells and thus increase their efficiency. This is primarily corn and sugarcane. However, this method cannot be extended to other crops.

Finally, you can try the genetic modification of plants at the most important stage of photosynthesis. In theory, plants can be made to produce an improved version of RuBisCO that will not react with oxygen. This is possible, but we still do not understand what this improved version should be: our understanding of the work of enzymes is not enough to design their improved versions. Now a lot of work is being done on using AI to solve this problem , but it is completely incomprehensible how long it will take. 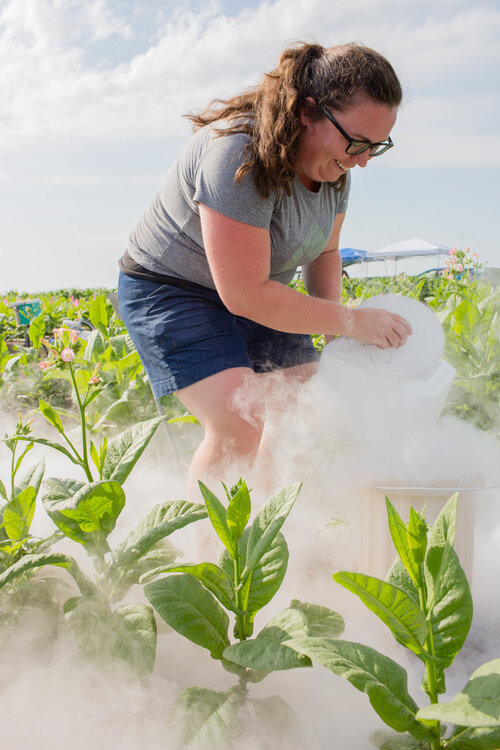 One of the authors of the article freezes experimental plants with liquid nitrogen for chemical analysis.

But there is another way. In a recent publication of a group of scientists from the University of Illinois, they demonstrated how to reduce the energy costs of eliminating the effects of photorespiration by introducing new genes of their photosynthetic bacteria into plants. This changes the main biochemical pathways in these plants. So far, there has been an increase in efficiency of about 13%, but this is only the beginning. This approach can work on any plants and lead to a new revolution in agriculture.