Rocket 9M729. A few words about the “violator” of the INF Treaty

Today we are talking about a 9M729 cruise missile, but for a start, there’s a little history - the Treaty on the Restriction of Medium and Small-Range Missiles (CIAS) was concluded between the USSR and the USA in 1987. Under this agreement, the creation and deployment of ground-based ballistic and cruise missiles from 500 to 5500 km. That is, both the USSR and the USA reduced the whole classes of missile systems under the INF Treaty - short-range ballistic missiles (Oka and Temp-S missile systems), medium-range mobile ballistic missiles (RSD-10 Pioneer / SS-20 and Pershing-2) and medium-range cruise missiles (Gryphon mobile complexes with Tomahawk missiles, as well as its domestic counterpart — the RK-55 "Relief" complex with the Novator design missiles, similar to the Granat naval missiles). The contract was valid for several decades.

So far, on March 5, 2013, an article in the United States did not come out about columnist Bill Gertz, well known for his connections at the Pentagon, who expressed concern about the American side about testing the latest Russian ballistic missile RS-26 “Rubezh”, which allegedly was formally ICBM (intercontinental ballistic missile, a rocket with a range of more than 5,500 km) is actually a medium-range missile. The topic is generally muddy and smells like insinuations on both sides. But here the program of creating the Rubezh / Rubezh-Avangard missiles fell under the sequester and the Rubezh complex was left alone. Until the fall of 2015, several Western sources (including the designated Gertz) did not begin to express concern about Russia's violations of the INF Treaty by creating a new cruise missile that allegedly violates the terms of the Treaty. And here the index 9M729 was already named and references to sources appeared, including in the domestic official resources - the Ministry of Defense and the State Research Institute of Instrument Engineering. Further, by the end of 2018, the following picture of the accusation took shape: Russia allegedly created, conducted tests and began deploying 9M729 cruise missiles with a range of more than 500 km in the front-line units of the missile forces. 9M729 missiles from 2008 to end 2014 passed tests (including the State) and as part of the missile battalions with 9P701 launchers and 9T256 transport-charging machines on the MZKT-7930-0000200 chassis began to enter the missile brigades armed with the 9K720 Iskander-M complexes. Which, of course, is a flagrant violation of the INF Treaty, if the range of missiles is indeed more than 500 km.

In 2018, there was a more or less intelligible argument of our Foreign Ministry: yes, there is such a rocket, but this rocket’s range does not exceed 500 km. Then it was true that it was supposed that in the first test launch it exceeded 500 km, but it happened by chance. In general, the normal “legitimate” rocket is the further development of the Iskander-M 9M728 serial missile. What is the difference? Warhead is different and accuracy is higher. Well, in general, you yourself are the violators - you have yourself there and then and this and in general “all back in the chalk”.

And by the end of 2018, the situation became tense and the Americans and the truth began to prepare to withdraw from the Treaty. And in this situation, the Ministry of Foreign Affairs and the Ministry of Defense decided to gather military attaches from different countries and show this same rogue violator in order to dispel all accusations. On January 23, 2019, in Moscow, a briefing was held by the Russian Ministry of Defense on the 9M729 rocket and designed to dot the “Yo”. In the future we will tell about the deep understanding of the results of this briefing. In the meantime, just the facts. 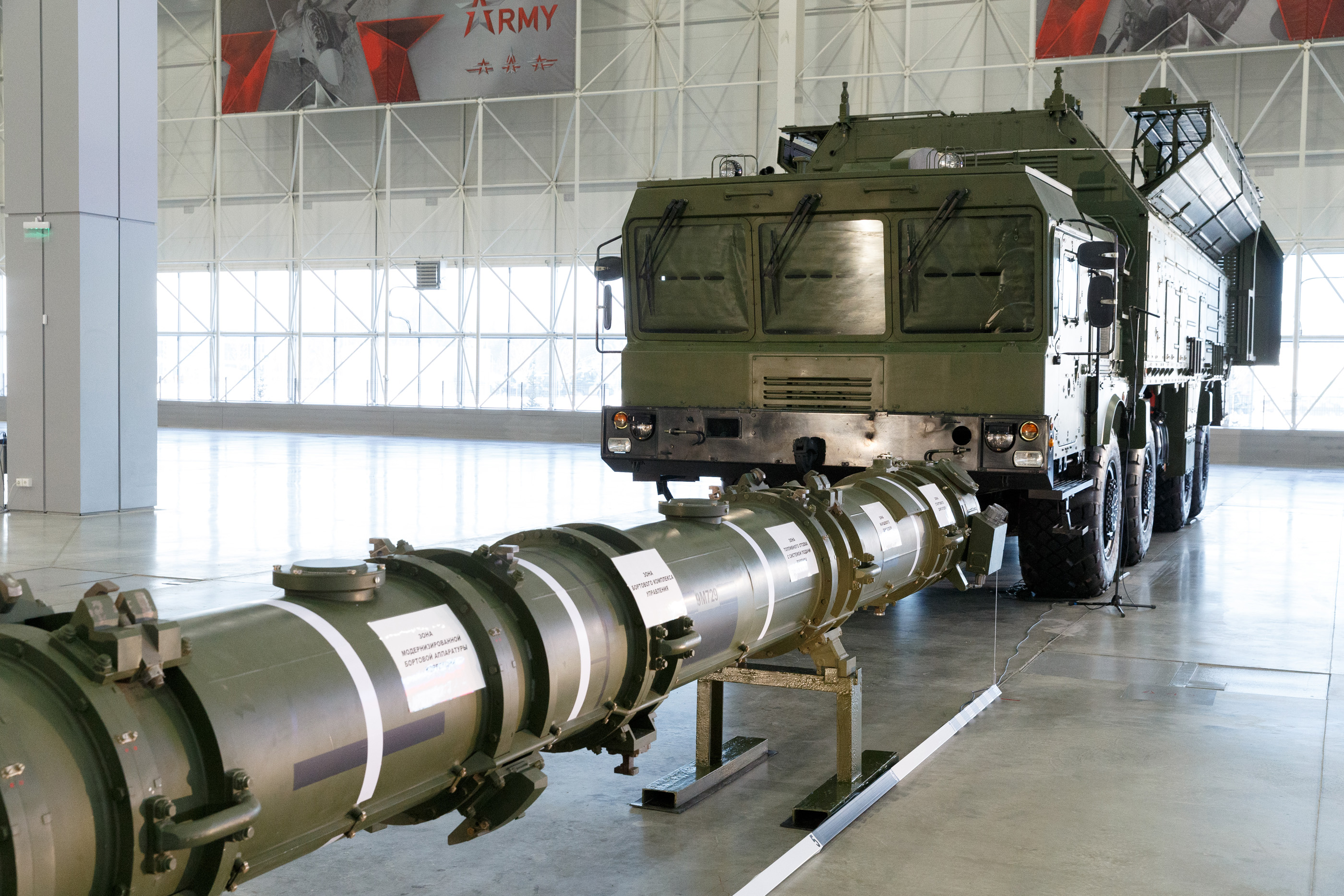 9M729 self-propelled missile launcher. Briefing of the Ministry of Defense of Russia on January 23, 2019.

First.The rocket 9M729 was not shown at the briefing. We saw pictures, a launcher, mockups or real samples of transport launcher containers, graphics, tablets and everything. The rocket itself was not shown to anyone.

The second.According to the posters and pictures, the new rocket 9M729 differs from the 9M728 rocket in that it has more warheads, a little more transport and launch container (TPK) - 7930 mm instead of 7400 mm, less distance (480 km versus 490 km) and a noticeably larger compartment with electronics. Questions arise here about the layout of the missiles, according to which the compartments with the control system and adjustments occupy almost a third of the length of the missiles, which, as it were, is not true or inspires great concern for the level of development of our electronics. Imagine - a pipe with a diameter of 514 mm and a length of 2 meters, filled with electronic components with a couple of processors. What could it be there? Maybe there is a CPU with a cooling system of incredible computing power or the world's largest math coprocessor? Accumulators are needed here only for starting - in flight the electronics are powered by a generator. In general, you can certainly justify anything, but these dimensions inspire. 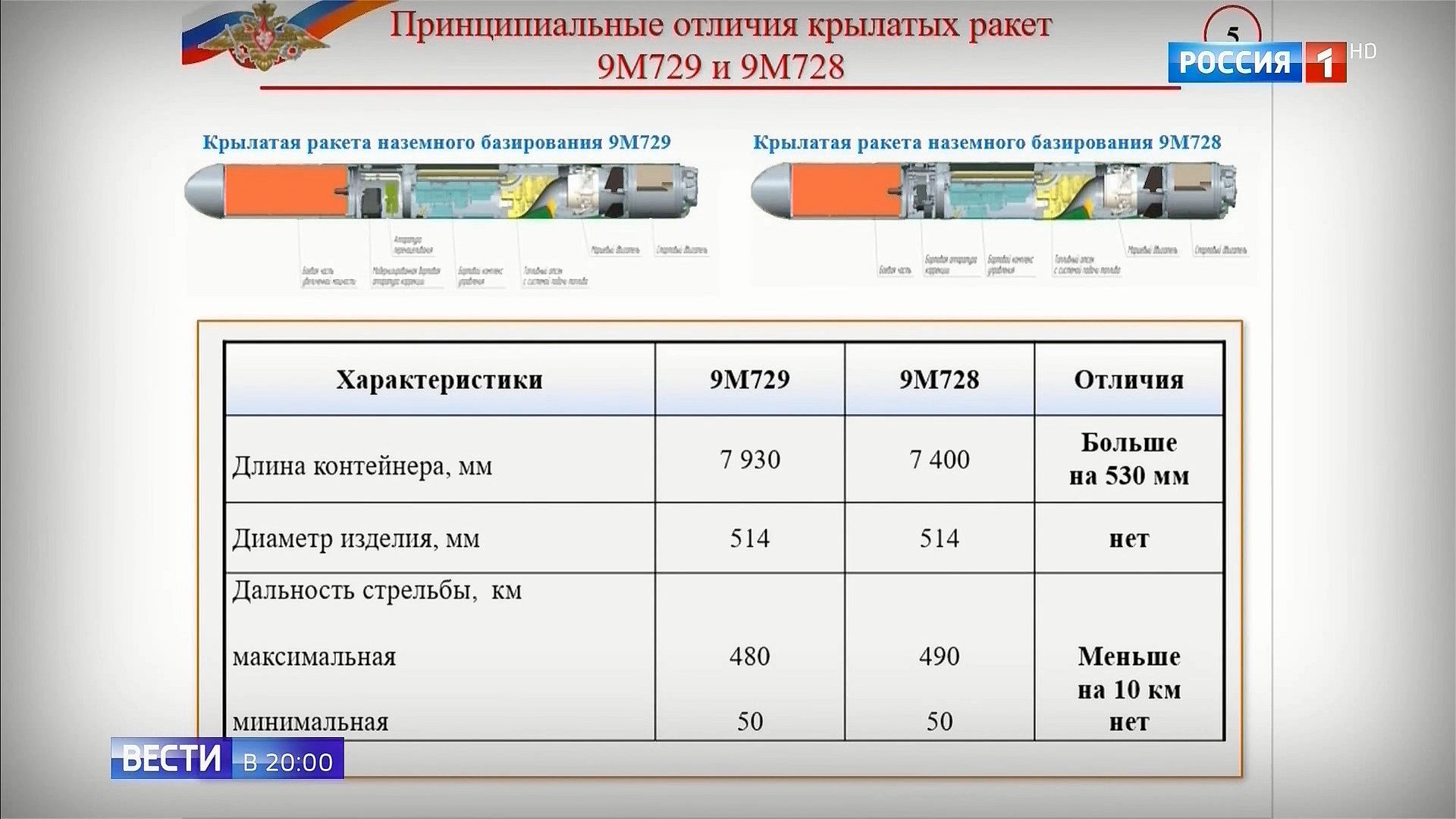 In general, it is unclear what is 9M729 and what are its significant differences from 9M728? what we see on the posters is somehow difficult to believe. But there is also an improved version of the rocket 9M729 about which we learned from the annual report of GosNIIP, which says that in 2014 the State tests of the 9M728 and 9M729 missiles and its modifications were successfully completed. What kind of missile it is is not yet clear - perhaps the 9M729 nuclear option.

Third.The new launcher, which was shown at the briefing, was not new. In 2007, the premiere of the installation for the ground version of the Caliber / Club-M cruise missile complex took place at the naval cabin and at the MAKS-2007 airshow. An installation similar to the Iskander-M was shown, but with four containers with missiles. This happened in the year of the first launch of the 9M728 cruise missile for the usual Iskander-M. Visually, this prototype launcher is almost identical to the one shown at the briefing on January 23, 2019. There were no signs on the unit, but we already know that for the production of a certain 9P701 launcher in quantities of one division per year (8 units ) in 2016 and 2017, TsKB “Titan” in Volgograd receives the Minsk MZKT-7930 chassis from Minsk. And also for the new transport-charging machines 9T256. 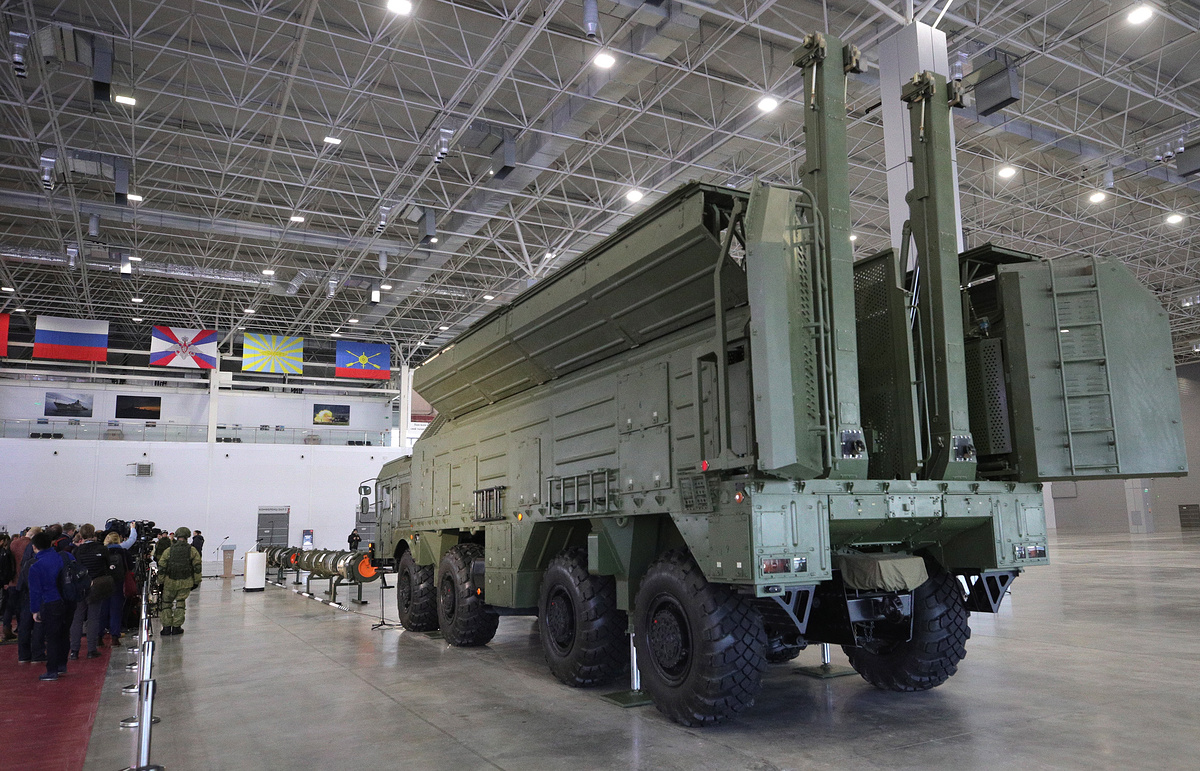 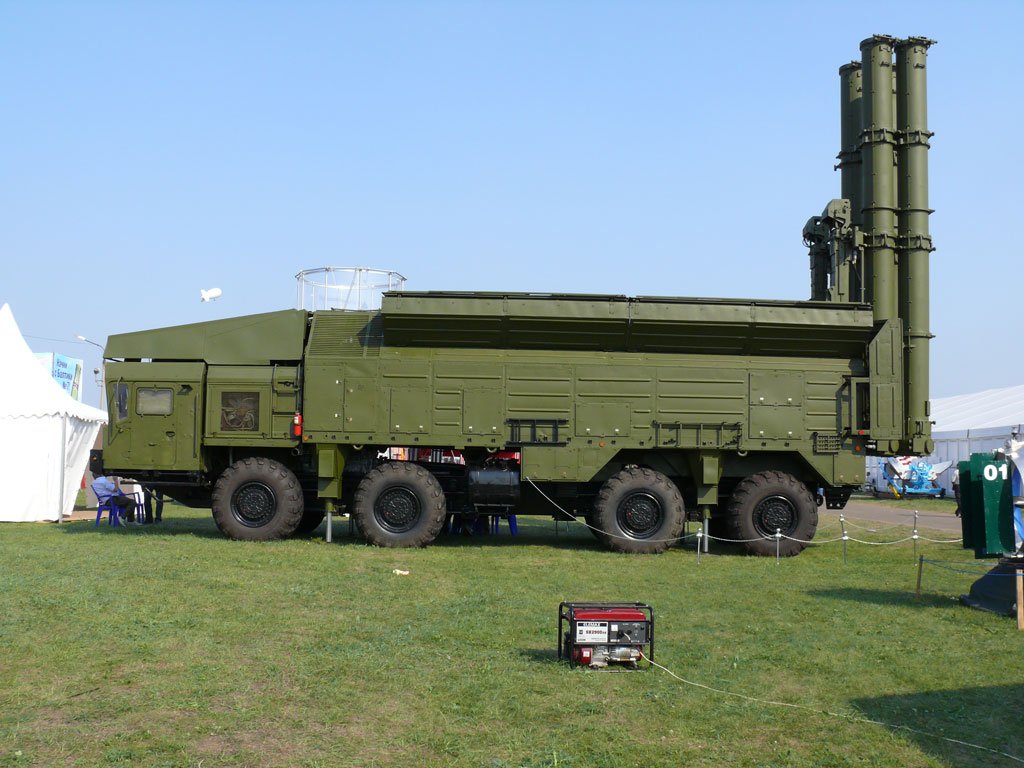 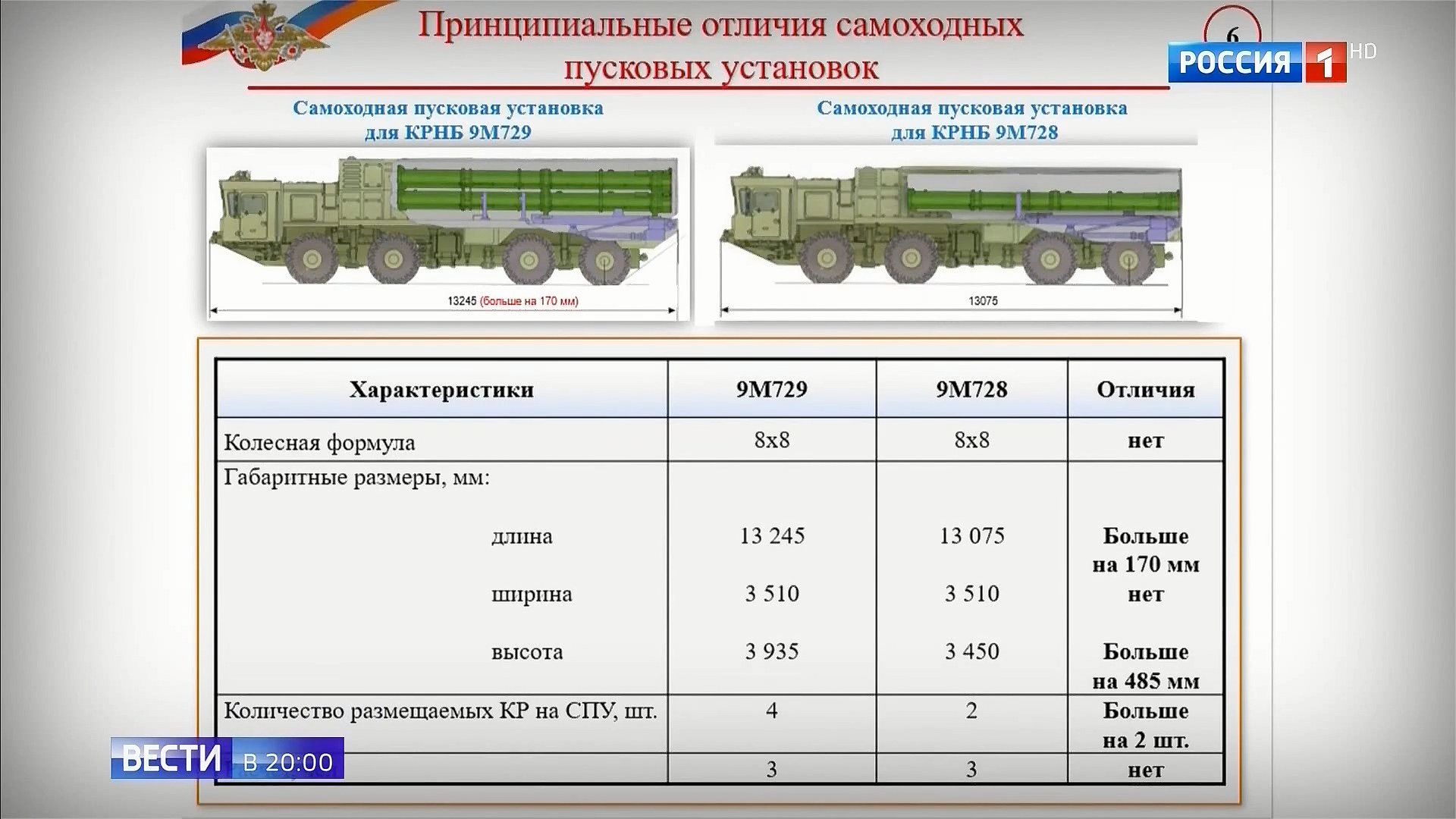 Четвертое.The briefing showed data on missile launches from the interspecific Kapustin Yar test site. With a reservation: in a radius of 5 km from a point with specific coordinates. The point turned out to be on the proving ground of the air defense troops near the site 231 with which missile launches were conducted for the Iskander-M complexes and their variants. What can be said on the plate? In the part of the Strategic Missile Forces, there are no questions for the tablet - here all the launches of the Topol-E and RS-26 “Rubezh” intercontinental ballistic missiles made from the Kapustin Yar test site at the Sary-Shagan test site are listed. Of course, there is still some work to be done on launching complexes of rocket forces and artillery of the land forces of Russia, but on the whole I, for example, have not yet developed a serious understanding of the purposes of demonstrating this tablet. It proves nothing and denies nothing, but the information is interesting, of course. Probably, 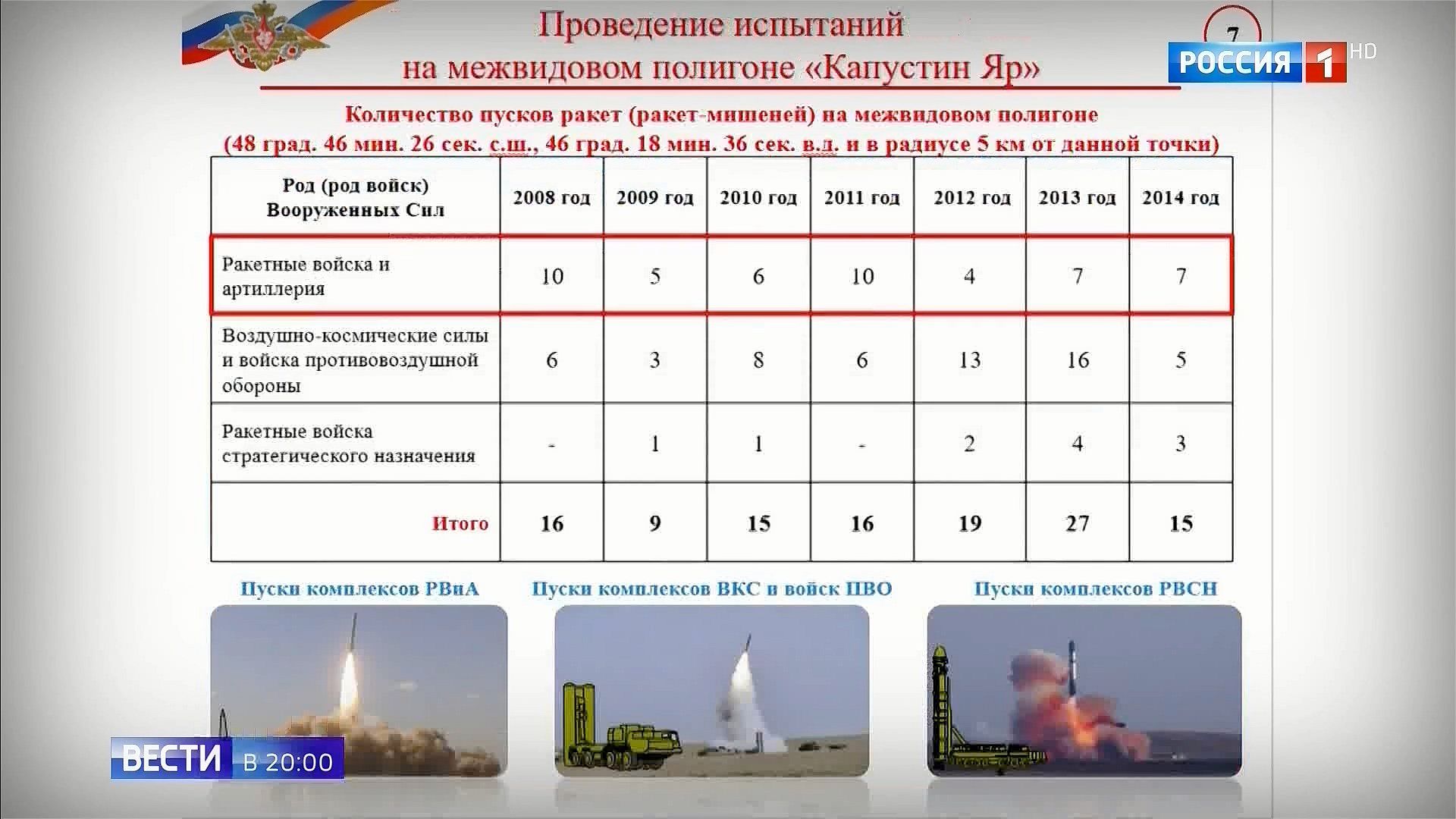 And what do we have in the end? The position of the Ministry of Foreign Affairs and the Ministry of Defense of Russia is clear: we have no violations, the United States for itself decided everything and invented it. Nobody is planning to show any other evidence of our correctness. The 9M729 rocket does exist, and it is indeed a somewhat longer version of the 9M728 rocket. A bit closer in dimension to the “large” rocket of the “Caliber” marine complex (within the “Caliber” complex, several types of missiles are noticeably different from each other both in size and in appearance and purpose), which has a range of up to 2500 km. For good in our time, such a rocket (9M729) should be modular - because with a small-sized nuclear warhead it would be logical to take a part of the released volume of the combat compartment with a fuel tank. Alignment issues can be solved with compensating weights. fuel transfer in flight and a digital control system. But whether the 9M729 rocket is modular or not is unknown.

And so, as it became known the day before yesterday, we have the continuation of rocket news ahead of us: we are also awaited by “exaggeration” of “Caliber” and “landing” of “Zircon”. Those. Lots of new and interesting things await fans of rocket technology in the next few years. So all the real details of 9M729, I think, will gradually become known.