It will not be news that controlling communication costs in an organization with more than twenty SIM cards is not a simple matter and many prefer to simply pay without having to worry about cost analysis.
There are specialized products on the market that allow you to track costs mainly in manual mode.
I would like to share the experience of creating a cost control system for several hundred thousand SIM cards based on MS SSAS.
As a field for action, a company was selected which at that time had about 120 thousand SIM cards, 90% of which was a provider with a logo in the form of an egg and devices installed in m2.

Having delved a bit into working with mobile providers, the process looked like this:

The first thing to do was load the data into the database. The organization used Axapta, in its database and it was decided to store data from providers. I will not describe the program code with which the data from the html accounts got into the database, because did not write it, and the essence of the post is not that.
The file coming from the provider in html format is divided into two components: details for the past period and a summary of each accrual number. The summary as a result we will load in base.
As a result, we will get information from such a file:

In the database, create a table of this kind:


And load the data from our accounts there.
It turns out something like this:

The [typeconid] field must first be converted to the standard 8-10 value, otherwise we risk having several hundred communication types, because approximately the same type of connection with the provider can be called differently, for example: “outgoing” and “outgoing.” or "Content category .. (and category number) ..".

As a result, we get a fact table for our cube.

Next, you need to design the measurements.
Each SIM card in the organization has the following properties:

We take part of the measurements from the fact table: personal account, provider, type of connection. We
extract the part from our database by joining the necessary tables.

Next, we configure the incremental replenishment of the measurement tables from the operating database to the repository. Here, someone like it, you can use timestamp, cdc, to retrieve only the changed data.
My tables are not big and I used the usual left join to get the difference of the two tables.

As a result, the parameters were summarized in one table with the primary key for the field "phone":

Where the parameters are not known, replace the values ​​with 'n / a'. 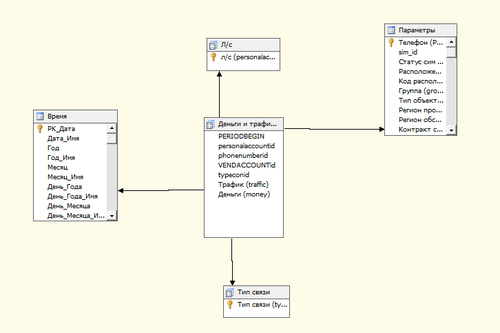 Next, create a cube: 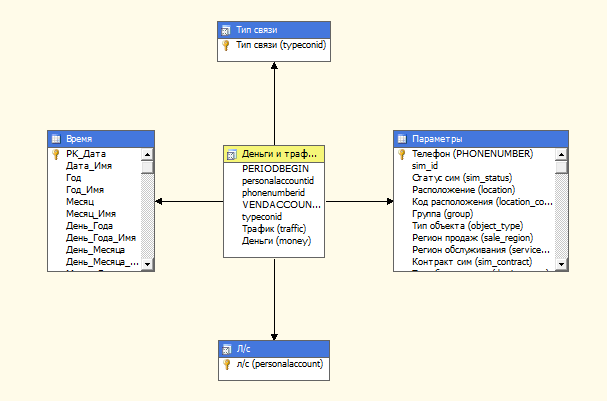 Since the "Cube" is used in different regions, you need to distinguish between rights. I did this on the “contract sim” dimension, creating a separate role for each region and writing the following on the “measurement data” tab (example for the Urals):

And be sure to enable the “activate visual totals” checkbox

As a result, each region can only see its own sims cards and their expenses.
Analysts connect to the cube through Excel and view costs.
Below are a few screenshots of what the analyst’s eyes look like:
Interface - an ordinary summary table 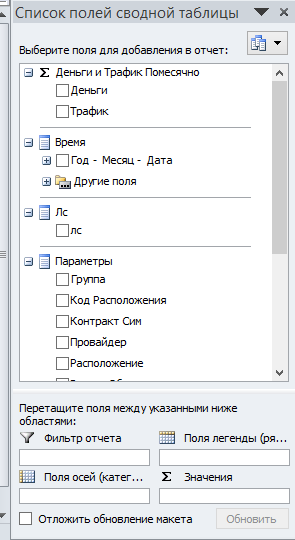 expenses by type of connection. Sim expenses for a month, clearly visible “peaks” that you need to deal with. 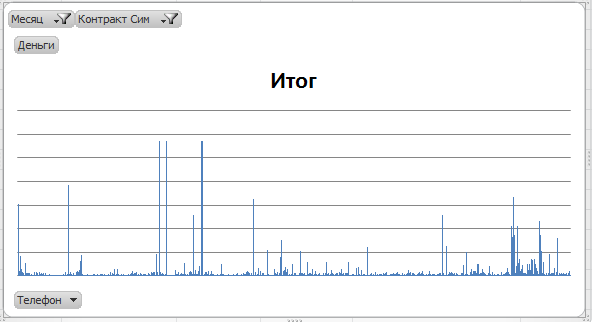 Traffic report for one of the SIM (numbers in minutes)

At the moment, the system is used in 7 regions of the Russian Federation.
In the first two months after the introduction of the system, expenses were reduced by about 20% and this is not the limit.

This topic is not intended to describe in detail the creation of an OLAP cube, but merely describes a concept that can be implemented in any company with a large number of SIM cards.

The system can be improved with the help of MDX queries, pulling out “interesting” cases and processing them.

If there is interest in the article, you can expand the technical details of the project.