Mission "Hayabusa-2": asteroids reveal the history of the solar system The probe forms a shock crater on the surface of the asteroid. Illustration of the artist

On December 3, 2014, the Hayabusa-2 space probe was successfully launched from the Tanegashima space center. The target of the probe is the asteroid 1999 JU3. It was opened on May 10, 1999 within the framework of the LINEAR project by the staff of the Socorro Observatory. There is nothing special in this asteroid, except for the fact that it was decided to send the Hayabusa-2 probe to it for disembarking and sampling the substance of the object. The device is developed by the Japan Aerospace Exploration Agency (JAXA).

The first Hayabusa vehicle was visited by the asteroid Itokavain 2005. The new object for study is two times larger than Itokawa, its diameter is 0.92 km. He is quite ordinary, belongs to the Apollo group. The asteroid's orbit is elongated, thanks to which, rotating around the sun, it crosses the orbits of the Earth and Mars. So, last week Hayabusa-2 finally reached the ultimate goal of its journey.

For the next year and a half, the probe will study the asteroid both from the side, from orbit, and on the surface - a descent module will be used for this (not one, but several). The module should not only take samples of the asteroid substance, but also deliver it back to the station. And that, in turn, in five years will “take” valuable cargo to Earth, for study in laboratories. Samples will be in a sealed capsule.

Why study asteroids at all?

The fact is that many of them are the same age as the Solar System itself, and if the planets and planetoids evolve, change, then the asteroids in most cases remain the same as they were at the dawn of existence. Thus, if you understand what an asteroid is made of, you can get an idea of ​​what formed the solar system, its planets and satellites of planets. Perhaps all of this will help ultimately find out how life came about, although this is a more complex issue.

In addition, scientists hope to get an answer to the question of how the type of a star and the features of its “work” influence the process of the formation of planets. Astronomers already have quite a lot of data on the composition of asteroids, which were obtained by observing, compiling various kinds of models and combining the obtained data into a single whole - scientific data.

By the way, the Hayabusy-2 mission is not at all unique in terms of delivering an asteroid substance to Earth. The predecessor, the first Hayabusa probe, successfully collected and sent soil samples from the Itokawa asteroid to Earth. It was a most difficult mission, accompanied by technical problems, but it still ended up at the finish line. In the process of work, the engines themselves failed at the station itself, individual structural elements, the probe suffered, the asteroid ground was assembled with difficulty. But overall, everything went well. On the basis of the data obtained, engineers and scientists were able to create a more advanced probe, which is now studying an asteroid.

Regarding 1999 JU3, there are two reasons why the probe was sent to this asteroid. The first is an elongated orbit, which was already mentioned above. The second is the age of the object. Asteroids of this type are very old, older than any others. It belongs to the C-class, whose representatives stand out among the "relatives" with an increased content of carbon and hydrated rocks. Perhaps it is this asteroid that will help answer the question of what the protosolar system was, which gave rise to the Sun and the planets. Due to the orbit of the asteroid, the probe can easily reach it, and then return to Earth.

From time to time, rock samples from which class C asteroids are made come to our planet. We are talking about carbonaceous chondrites, which scientists have been studying for many decades. But meteorites belonging to the carbonaceous chondrites, fly through the thickness of the earth's atmosphere. This means that they become very hot, which leads to a change in composition. The asteroid, as mentioned above, does not change over time, it is a frozen sample of the substance from which our system was formed.

In order to meet with the asteroid, the probe had to fly more than 3.2 billion kilometers. At the same time, at the final stage, the object to which the probe was aiming was located at a distance of 280 million km from the Earth. And no, this is not a typo, it's really about millions of kilometers, not billions.

The trajectory of the trip turned out to be so unusual so that the apparatus had the opportunity to perform a gravitational maneuver, to pick up speed with the help of engines and to catch up with the asteroid. 1999 JU3 rushes in space with great speed, and in order to enter its orbit, the probe must catch up with the object and coordinate its speed with the speed of the asteroid. This is difficult, but astronomers of the Earth can easily make calculations necessary for travel. The engines at the probe are ionic, they were turned off only last month, after Hayabusa-2 reached the asteroid at a distance of several thousand kilometers. 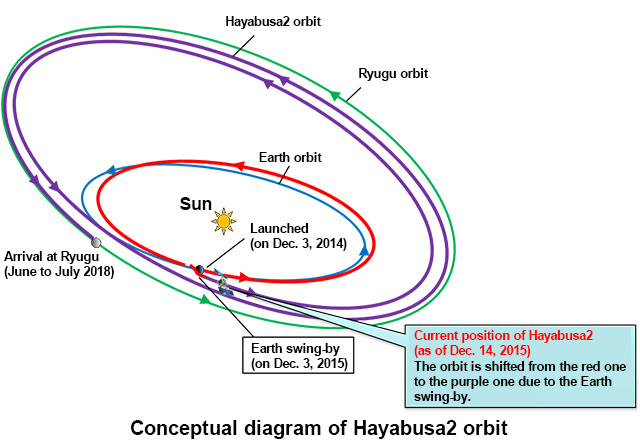 Next, it was necessary to examine the asteroid surroundings for the presence of smaller “neighbors” that could damage the probe in the event of a collision. We are talking about the area of ​​gravitational influence of the asteroid itself, the diameter of this sphere is about 100 km. Fortunately, nothing like this was found, so now the probe can work without any problems.

Now "Hayabusa-2" has entered a 20-km orbit, and from this distance continues to study the asteroid. The probe works fine, there are no technical problems. In this expedition there would be no point without communication. It is - the device receives signals from the Earth and sends information back. The delay is approximately 15 minutes.

Engineers and scientists who designed Habiaus-2, equipped it with a number of scientific tools with which the asteroid is studied:


It should be noted that already this year Hayabusa-2 will get close to the asteroid to a distance of just 1 kilometer. In early October of this year, the MASCOT descent module and one of the three smaller MINERVA-II modules will be landed on the asteroid. Unfortunately, at the end of this year there will be no news from the probe - it will be in the zone from where the radio transmissions are blocked by the Sun (it will be between the probe and the Earth). Accordingly, without control from the Earth, the probe will not be able to perform active actions - just watch what is happening. Communication with the probe will be established again no earlier than January 2019. Accordingly, the work will continue at the same time.

What have you managed to find out?

In principle, almost all the characteristics of an asteroid determined with the help of the probe, as well as its “behavior” coincide with the calculated ones. So, its diameter is 900 meters, which astronomers have determined from Earth. The period of revolution around its axis is 7.5 hours. There are large craters on the surface, with a maximum funnel diameter of 200 meters. There are boulders, something like mountains and even a lonely rock, located directly on one of the poles of the asteroid. "Mountains" and rock have an albedo higher than that of the surrounding material, so it may well be that they are composed of rock that is different in composition from the surface material.

It may well be that earlier the asteroid was part of a much larger object - also an asteroid. Its direction of rotation is opposite to the direction of rotation of the planets of the solar system and the sun. True, Uranus and Venus also rotate in the opposite direction. Asteroid 1999 JU3 belongs to the near-Earth group. The orbital period of the body around the Sun is 474 days, and the average orbital speed is 27 kilometers per second.

The capsule with the substance will be delivered to Earth in December 2020. Not long, but not so much to wait. By the way, the study of the asteroid is not the only important task that the creators of "Hayabusy-2" set for themselves. Another goal is the gradual development of technologies and methods of returning space missions, mostly interplanetary. In addition, scientists are gradually exploring the potential of developing asteroids. In order to understand how far-reaching space mining can be, it is necessary to know what asteroids carry. Since the mineral composition of the asteroid is uneven, so it may well turn out that it has useful resources for humans.