NASA held a public press conference on the progress in the development of the Kilopower reactor for space applications. A year ago, I described this project in detail and then the development was brought to the test of a system for converting heat into electricity. Well, it can be stated that the magnificent progress of the project has become even better. Kilopower Reactor on the Moon (render).

In 2017, in the center of them. Glenn NASA conducted full-scale thermal vacuum tests of a prototype reactor using an electrical simulator of decay heat inside the simulator of the depleted uranium core. In general, it should be noted that working out the mechanism of heat transfer from the core to generators based on Stirling engines (hereinafter referred to as GDS) with the help of heat pipes was almost the most complex and important part of the project, and therefore dragged on for 3 years. In particular, the challenge is to launch sodium heat pipes, in which it is necessary to melt and evaporate some of the sodium in order to form a sufficient heat flux, but not to overheat them. Given the “self-managed” nature of the reactor, this is not so easy from an engineering point of view. Temperature in Kilopower heat pipes at system startup. Thermocouples are arranged in ascending order from the AZ simulator to the heat receiver (hot end of the SDS).

However, although the high-temperature heat pipes and the GDS are interesting things, all of this did not concern the nuclear part of Kilopower. A full experiment with a nuclear heat source was named KRUSTY (Kilopower Reactor Using Stirling TechnologY) and was conducted from autumn 2017 to March 2018 in the DAF laboratory located in the Nevada nuclear test site. In this laboratory (which used to be the assembly site of nuclear charges for test explosions at the test site), four critical assemblies are now located (nuclear assemblies of zero or low power used to verify neutron calculations) used by US nuclear laboratories for various experiments (including quite peaceful - for example, to measure dosimetric constants). By the way, the history of Kilopower began in this laboratory, because For the KRUSTY experiment, the Comet machine was taken, formerly representing vertically shifted halves of uranium ingots and reflectors. Now Kilopower itself with a vacuum chamber was placed on top, and a beryllium oxide reflector was pushed onto the enriched uranium blank with a moving system. The assembly from the Comet machine and the Kilopower reactor used in the KRUSTY experiment. Starting the reactor is carried out by sliding the side reflector of beryllium oxide on the reactor core

After assembling the core (which, by the way, is a separate subgenre - with a bunch of restrictions on the presence of a number of people, materials), system behavior was tested in case of failures of various systems. NASA writes “conducted without power” here, but a slightly different picture emerges from the experiment plan. The core assembly of the space reactor prototype. One of the most frequently encountered restrictions when working with critical assemblies is a restriction on the presence of people nearby (say no more than 2 people within a radius of 2 meters) so as not to tempt fate with a large number of water reflectors around the weapons material. Elements assembled by engineers are described in the picture below: Next, a physical start-up of the reactor without a conversion system was performed with measurements of the reactivity characteristics of the reflector and the multiplying properties of the system, as well as, judging by the plans of the starting carbide carbide absorber rod, which is designed to be installed in the center of the core and ensures that the reactor does not start at abnormal situations, for example launching into orbit.

The planned experiments included inputs of reactivity in the cold state of the reactor at 0.8 and 3 dollars (1 dollar means an excess over criticality equal to the fraction of delayed neutrons, after which the acceleration rate of the reactor increases dramatically). In this case, the neutron power increases (in the case of entering $ 3 - fast) until heating and expansion the fuel introduces negative reactivity and the reactor “calms down” at a certain power level. According to the plans from the slide above, the multiplying properties of various elements of the assembly should have been measured at different temperatures.

It should be noted here that the NASA / DOE press release is very stingy on details, what was actually done, but I am 99% sure that these measurements were carried out in winter. Without experimental verification of the multiplying properties of the reactor, it would forever be destined to remain paper and not be allowed to run. Installing the vacuum chamber on the "conversion part" Kilopower during the winter tests.

Finally, comprehensive tests of the system were conducted with the start-up of the reactor and the converter system, the output to the nominal and the power run. The whole test took 28 hours, from the heat pipe heating curve above, we can assume that the experience looked like “start in 4 hours + 24 hours of operation at nominal value”. Whether tests were conducted on the self-controllability of the reactor (change in thermal power with changing load) is not reported, but one picture from the press release suggests that yes, it was done: Strongly clickable In the background, here are the GODIVA IV and Comet critical control desks, you can see the stand from Comet with Kilopower on the screens, the reflector is raised to the “start” mode and the snow on the camera screens also hints that this is the moment of a long run. On the screens on the back table, one must assume some nuclear parameters of the assembly, on the screens closer to us are temperature graphs with thermocouples and the state of the systems and instrumentation. The teeth on the temperature graphs can be quite imagined as the inclusion of additional loads. Plans for this run also confirm this idea: At a press conference, the NASA engineer also noted that “the team conducted tests of the launch sequence, parameters when working at nominal, efficiency — and the system meets the requirements for all measured parameters.”

Anyway, for NASA / DOE this is a significant step. Over the previous 40 years, not a single civil space reactor project reached the physical launch, although many have gone through the development and thermal vacuum tests. Less is known about military projects, at least for the SP-100 reactor tests have gone very far - it is possible that it was tested in the form of zero-power critical assembly. This success is incredible against the background of decades that have spent the previous, and not reached the full ground tests, projects. However, despite the excellent concept and successful ground testing, the future of Kilopower is unclear. Mission concepts for targets in the Kuiper belt using the 10-kilowatt version of the Kilopower to provide thrust for vehicles.

The scope of such a reactor, though relatively big, is not so big at the same time: replacing RTGs in missions with automatic interplanetary stations beyond the orbit of Jupiter, in the case of a 10 kW version, also provides electric power to manned missions to the moon (although the issue of lunar pole missions controversial ) and most importantly - the supply of electric propulsion for missions to distant bodies of the solar system. The last option, called Nuclear Electrical Propulsion, is the most productive in terms of improving the capabilities of spacecraft and allows you to achieve goals that cannot be achieved on chemical jet engines, such as Charon orbit, Pluto and other Kuiper belt bodies.

However, the 10 kilowatt version still needs to be developed. Using the 380-watt heat pipes, which are on the prototype, this is impossible, and in general the task to remove 40 kilowatts of heat from a relatively small blank of uranium without a moving coolant looks difficult. It is quite possible that the development of a 10-kilowatt reactor will be dragged out for a long time, and it would be nice to find consumers for the 1-kilowatt version, so that the reactor would fly.

Replacing the RTGs (especially their versions with HDS) does little because of the large dead weight of Kilopower, except for the potential reduction in the cost of vehicles (RTGs cost NASA about $ 100 million per kilowatt, which is clearly more expensive than Kilopower). NASA mainstream engineering continues to make assessments using plutonium RTGs! 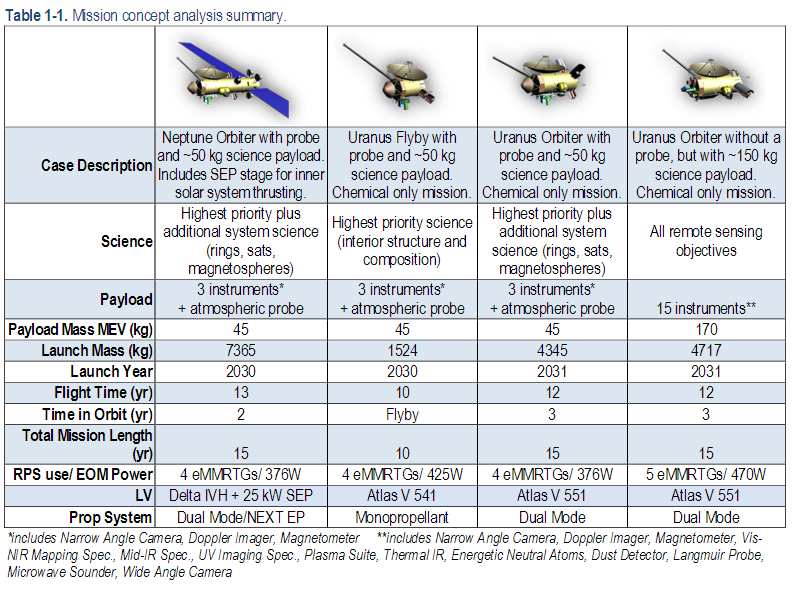 NASA's planned missions to Neptune and Uranus are still being carried on board the RTGs - the development of the onboard energy source of the Curiocity rover.

Manned / long-term missions somewhere on the Moon or Mars, however, have remained in the conceptual phase for many decades, and it does not seem like the horse that can pull Kilopower into space. Actually, even distant AMCs provide for the pace of launches 1 time in 10 years, and even less. It seems that the next step should be made by NASA, having found a worthy mission for Kilopower and to make it as soon as possible. Let's hope that in the coming year we will see such a choice that will give the best chance for a new nuclear reactor to appear in space, which we have not seen for a long time.