20 games to teach the child programming

Hi Habr! My name is Oksana Selendeeva. I believe that it is better to start programming from a young age - 4-5 years old, because coding actively develops the cognitive functions of the brain in children, and this subsequently helps them to master the exact sciences perfectly. And you can try yourself in programming through educational games. With the teachers of the CODDY programming school for children, we have compiled such a selection.

Box Island is a mobile 3D game that teaches the basics of coding through an exciting adventure. Players travel around Box Island and help the character collect stars scattered across the desert. Through the game quest, children learn the basics of algorithms, sequences, cycles, and conditional expressions, and the game develops algorithmic thinking and pattern recognition.

CodeKarts is an application for preparing preschoolers to learn coding. The puzzle develops observation, concentration and logic. The game takes place on the track: the children write the code and make up the path for the racing car. The game is available in two modes: with one car without time limits or competition with the application CodeKarts. 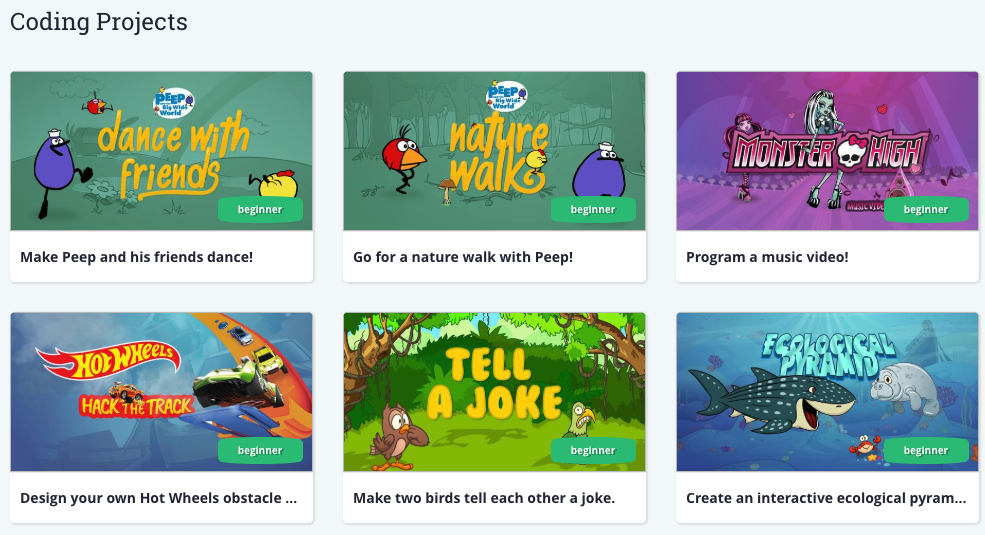 ScratchJr is an introductory programming language for children that helps you create your own interactive stories and games. Children revive characters to move, jump, dance and sing. Children will learn to solve problem situations, develop projects and creatively express their thoughts using technology.

Elchavo- a free game whose developers urge parents to study with their children, because in the 21st century, programming should become as essential a subject as writing or reading. Through the game, the child will learn how to program instructions for the character and control the object in three-dimensional space, and he also earns points and medals.

Konstantin Zhuchkov, teacher of the course “Programming for the smallest”

FixThe Factory is an obstacle puzzle from LEGO. Children run the EV3RSTORM robot, which places the batteries in the factory in the right places. The game develops logical and spatial thinking, teaches basic operations. I advise the game FixTheFactory, because it has a beautiful design and clear tasks. Children solve puzzles as if nuts click. And most of all children are amazed that in their 4-5 they are already programming.

SpriteBox is a full-scale adventure game that helps you quickly move to coding in a real programming language. Learning begins with the management of icons, which are then inferior to text commands. Children solve puzzles and learn sequences, operations, cycles as well.

Lightbot is a mobile application from the creators of SpriteBox, which teaches programming with simple puzzles. The child writes the code and commands the robot, which can walk, turn, jump and turn on the light.

PictoMir is a Russian development for teaching children the basics of programming. In Piktomir, the child collects a simple program of icons and controls the robot. The game is aimed at preschoolers, so writing code is not required.

Scratch is a popular programming game for teaching children from 8 to 16 years old. It is suitable for the study of algorithms, data and variables, the development of basic concepts. The game is simple, clear and leads to quick results - the child creates cartoons, animation, mini-games with the help of new skills. Scratch teaches not only programming, but also design. To get started, just watch the instructional video or read the book “Scratch for Kids”.

Minecraft- favorite game of children around the world. She inspired Microsoft to create an educational program based on it. The child chooses a hero and writes code to interact with the character. In the process, he learns basic programming concepts and learns to use commands to control the movements of heroes in the game world. In Sweden, Minecraft is included in the school curriculum as a tool for the development of digital creativity. Better to understand programming with Minecraft, you can use the book by Craig Richardson. 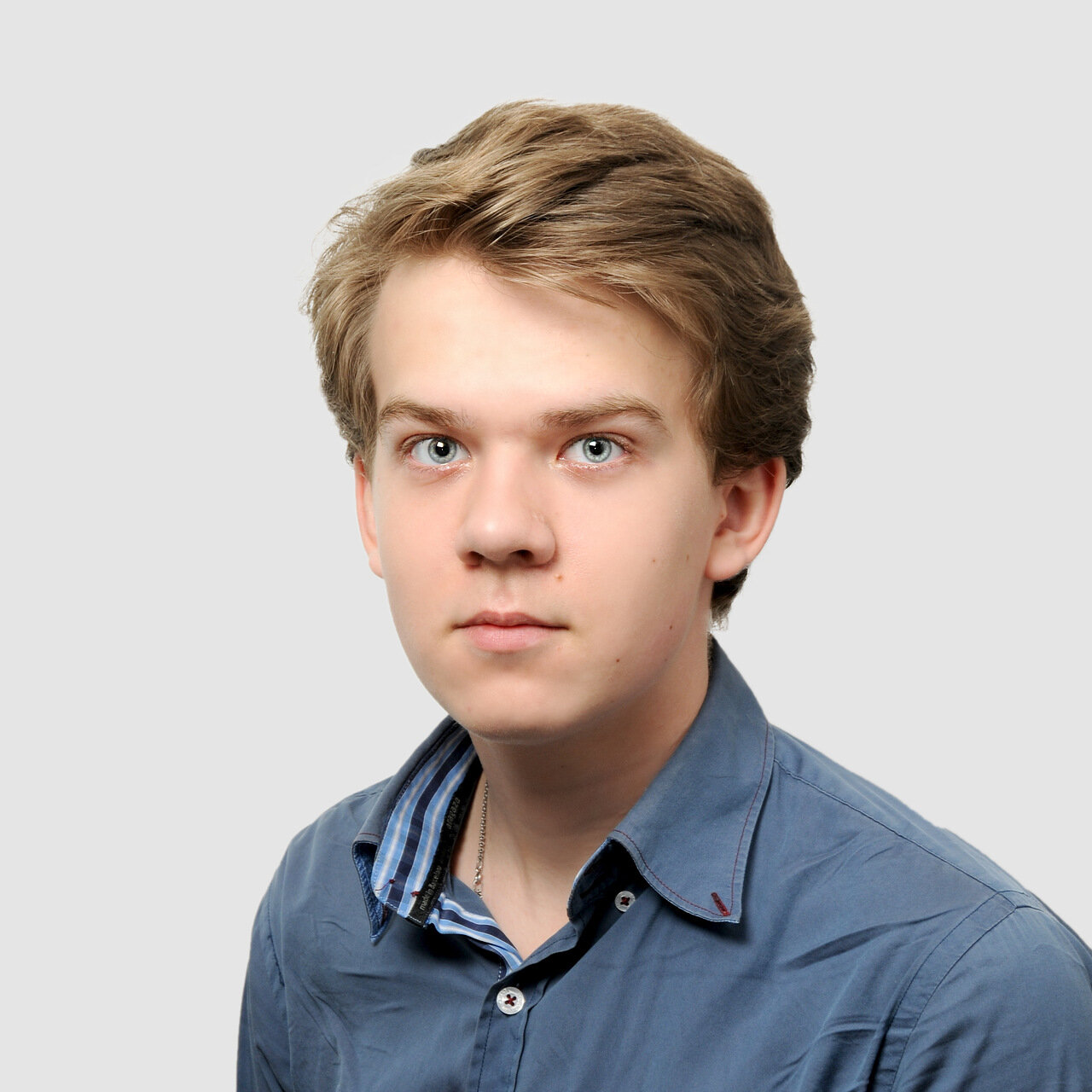 Minecraft develops the child’s imagination. It helps children to understand what materials the tools are made of and in general our whole world. Due to the division of the game world into cubes, children develop spatial imagination. Also, children learn to protect nature, because the game has real cause-and-effect relationships. If a fire starts, the forest can completely burn out. If you destroy the class of animals, they will cease to appear.

CodeMonkey is a fun and informative game in which children learn to program in real language. They will help the monkey get bananas and interact with other animals. The game develops creativity, logic, critical thinking and problem solving skills using IT.


Tynker is a platform with many training courses and games on HTML & CSS, JavaScript, Python, and other programming languages. Topics are gradually becoming more complex - from the basics of coding, students move on to game design, robotics, and augmented reality. In total, Tynker has about 2000 games for beginners and advanced coders. Also, the games are divided into universal, for boys and girls.

Kodu is a visual programming game from Microsoft. She has simple controls using icons, her lessons are divided into instructions and actions. With Kodu, you can create a 3D game, for example, on an Xbox.

I love the Kodu Game Lab because it allows you to visually show your child the logic of programming, develops three-dimensional thinking and has a colorful design. Children can easily create their own game, which you can then play with friends.

Grasshopper is Google's mobile game for learning JavaScript. Children learn to understand basic programming concepts through visual puzzles. The cheerful grasshopper helps them in this.

Code Kingdoms is a game for learning Java and Lua. The developers promise that the guys will be able to create their own games and projects in Minecraft and Roblox. The game has interesting tasks and mechanics, good visualization of results, there is a library of video courses and online support.

Codecombat- is a platform for the study of computer science. The games and courses are designed with the support of teachers so that the learning of programming is fast and of high quality. Students write code starting from the first level of the game, and see how their changes are updated in real time. It helps to quickly master the syntax and learns to write literate code. 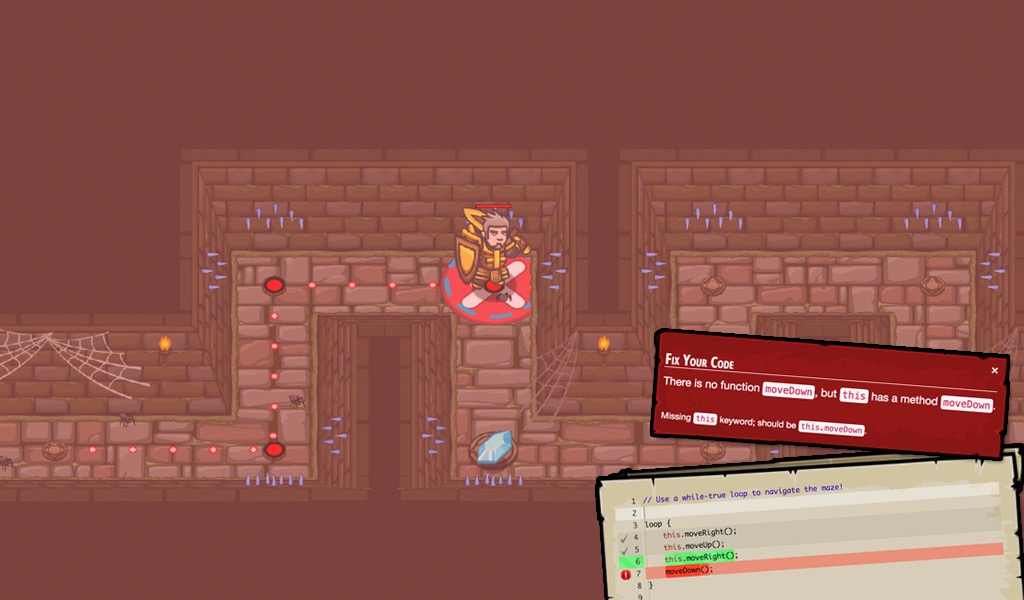 Development of the game in Codecombat

recommend CodeCombat - a full-fledged simulator designed in the form of an RPG game, in which complexity gradually increases, and interest is warmed up by the character. The guys master the programmer's tools through the solution of logical problems. After they are completed, new ones, made in the form of loot, become available, due to which you immediately want to try them out. It can be seen that the developers have invested a lot of work in the program and tested it on real people.

Gamefroot is a simple tool for developing and testing games with the ability to share the creation with friends. The child will learn how to create animation and games with modern graphics.

Arduino is software that will interest your child with robotics. Originally developed for prototyping by students with no programming experience. Later, the Arduino gained popularity among children and teenagers, and the developers adapted the application. It has become even easier, but not lost the fascination.

Flexbox Froggy is a game for learning the modern way of the Flexbox layout. The child will learn how to align objects on the page with a code, and the frog Froggy will help him in this. The game has instructions on how to move the frogs on the lily. 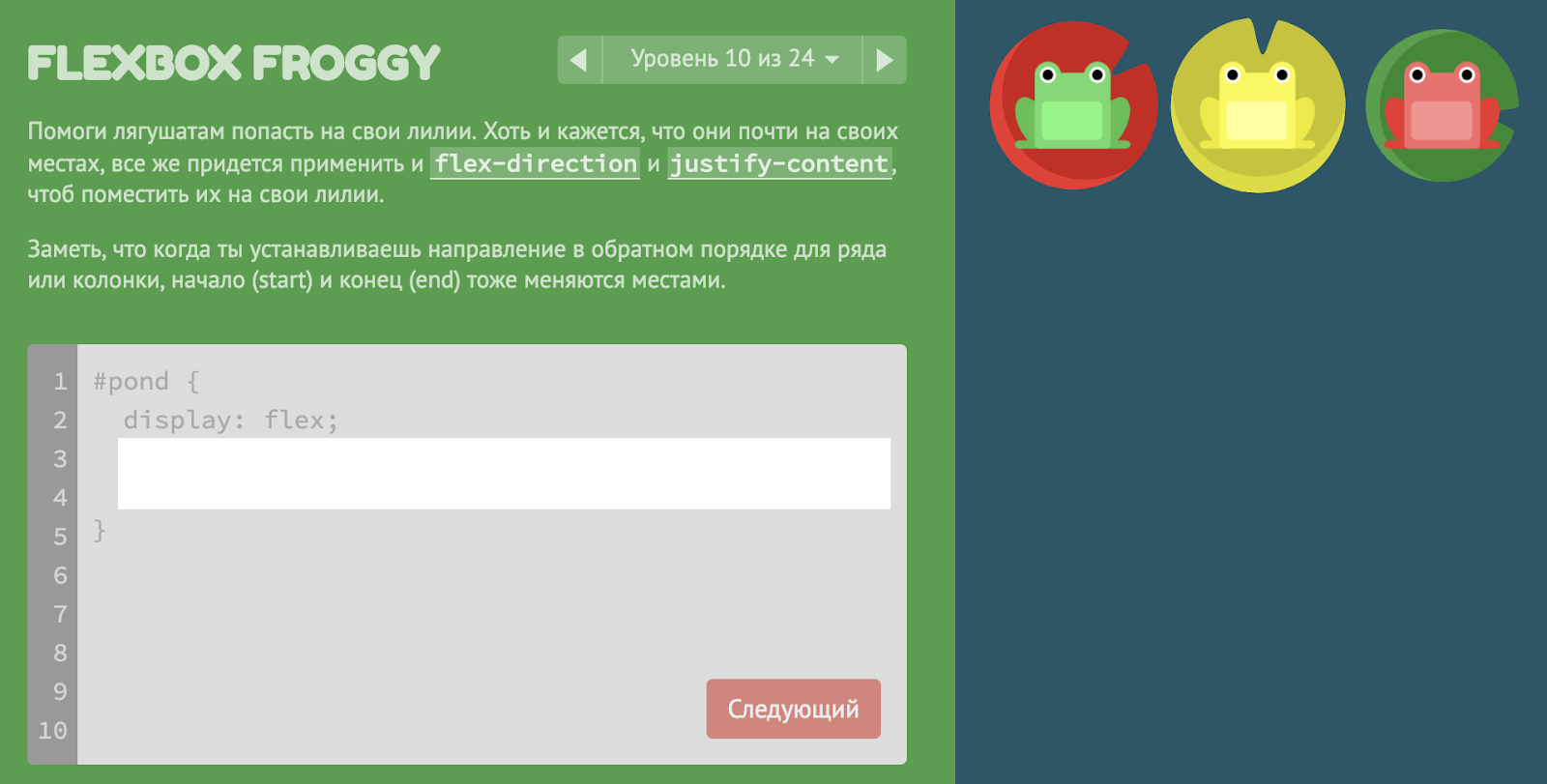 Grid Garden is a Flexbox Froggy-like game that will teach you how to write CSS to grow a carrot garden. With the help of CSS-properties watering the garden, and the better it turns out, the greater the yield.

We told not about all the games for children, only about the most interesting ones. To choose suitable for the child, be guided not only by age, but also on character, and abilities.