I want a robot! So that he entertained me ... and danced himself ... and cooked ... and cleaned. While you continue to dream, I’ll talk a little about one wonderful robot that you can buy for a reasonable price today and at the same time we will figure it out with you whether he can dance, entertain, and wash socks. And this robot is called Bioloid. It is released by the Korean company Robotis. An interesting feature of Bioloid is that you can assemble several different types of robots from a set of parts, from a simple barrier to a dinosaur robot or an android. In fact, you can collect your own unique robots.


There are 4 modifications of this robot: Beginner Kit, Comprehensive Kit, Premium Kit and Expert.

Beginner kitallows you to collect up to 14 different robot designs. All other models - up to 26 options. Using the Bioloid starter kit, you can assemble robots with a maximum of 4 degrees of freedom. It is recommended for those people who first encountered the design of robots. So, quite simply, the Beginner Kit looks like: Comprehensive Kit allows you to collect as a simple barrier with 1 degree of freedom, and a spider or humanoid with 18 degrees of freedom. The Premium Kit is more expensive than the previous model due to the presence of: casing, rangefinder, biaxial gyroscope, obstacle sensor and some other less important components. Otherwise, they are identical. Bioloid Expert Kit is intended for educational and research purposes. It contains a development environment for the C programming language, wireless communication with a computer, a wireless camera and supports an image recognition library. As already mentioned, you get not one, but a set of 26 different robots, each of which can be programmed for certain actions. A sort of robotic constructor or even a transformer. Included is a set of servo modules from which you can easily assemble any robot. Servo modules communicate with each other via the RS-485 interface and transmit data to the main control unit. Thanks to the unique identification number of each servo drive, possible confusion is eliminated.

All that is required to assemble any robot is a set of elements from the kit and a screwdriver. Robots use the most common Dynamixel AX-12 servo model, which can be ordered separately through the American online store for $ 45. They provide a high output torque, good positioning accuracy, are networked and have flexible settings.

The brain of the robot is a CM-5 microcontroller based on atmega128, which is programmed using the Roboplus software supplied with the robot. It is equipped with 128 Kb flash memory, 2 UART ports and 6 control keys. LED indicators provide visual feedback on the current state of the robot.

As a sensor, Dynamixel AX-S1 is used. This is an all-in-one sensor module, it determines the sound source, measures the distance. Includes: IrDA receiver, 3 IR sensors, microphone. Roboplus software is simple enough to understand the basics of working with it. You only need to know English, because it has not been translated into Russian. Roboplus includes the following modules: RoboPlus - RoboPlus Task, RoboPlus Motion and RoboPlus Manager. For advanced users, there is also a RobotPlus Terminal and Dynamixel Wizard. 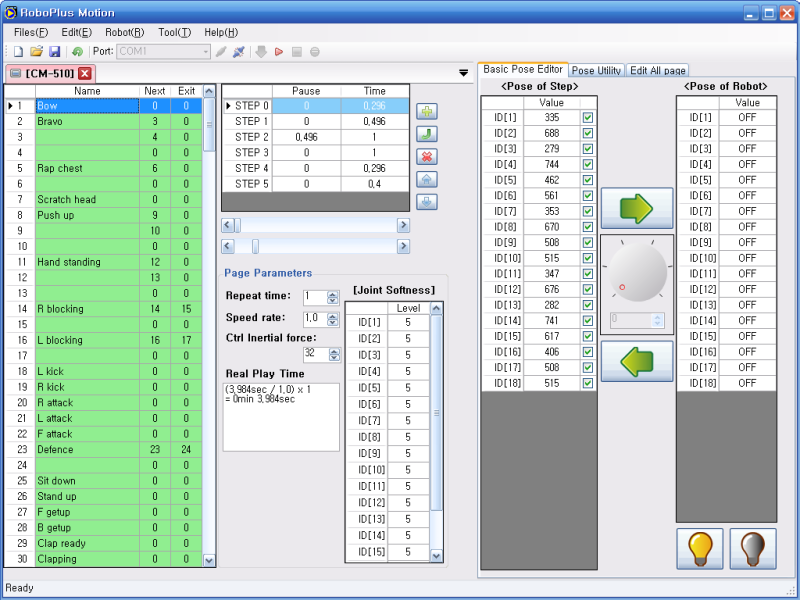 There is a 3D simulation of the movements of the robot. An example of working with the Roboplus program:

Who is this robot for?
Returning to the questions at the beginning of the article: no, you won’t force him to wash his socks, but he will be able to dance, which this video clearly shows:

First of all, it is an excellent tool for studying the basics of robotics, so it is often ordered by scientific organizations and institutes. If you are a big radio amateur, the field of action opens before you wide. You just need to consider that the cost of such a robot is not small, from $ 350 for Beginner in the USA and from 25,000 rubles in Russia.

We will wait for the appearance of even more intelligent and affordable robots. Apparently, with the modern pace of development, it remains to wait not long. By the way, if you are interested in following and taking part in various projects related to robotics, welcome to the WikiRobot group .

UPD . Due to the large number of questions about the place of purchase in PM, I am writing an update - you can buy Bioloid (except for the Expert series) onRoboticsLab .