About 2 weeks ago, a girl called my mobile phone, introducing herself as a Beeline employee.
The girl, referring to the fact that I have long been a subscriber of Corbina Telecom, and now - "Internet Beeline", offered me to try a new service - " Digital Television Beeline ." Completely free for 2 months. The so-called "Try & Buy" system. I tried it, if I liked it - buy it.

Since I have not had a zombie in my room for a very long time, and its role is played by a TV tuner connected to a computer that catches 12-15 channels with a creak, I decided to try this service as a replacement for the tuner. Fortunately, everything is free. The only thing I missed then was I did not specify whether this service works on a computer. But in vain ...

On the appointed day and hour, an installer came into my apartment, at a parade in uniform, with a skein of vitukha and a black box.
- Where do you have a computer and where is the TV that we will connect? Asked the installer.
“We will connect the computer,” I answered.
- And you can connect only the TV. And only one. - the installer was stunned by the answer.
That's it on ... Well, telly, telly. Showing parent TV.
The installer in a few minutes stretches the wire from the computer to the TV, crimps the wires and connects the equipment.

It took only some 10 minutes, and here I am - the happy owner of digital TV.

I filled out all the papers, the installer showed the basic functionality and left.
Claims to connect - no. The only thing I didn’t really like was the communication with the client on “you”. But that's another story.

So, he left, and I began to deal with a new toy.

Prefix
I got a prefix with the recording function of  Cisco CIS430 IP-TV STB with HDD , Dark Gray color with a D-Link DES1005D switch . 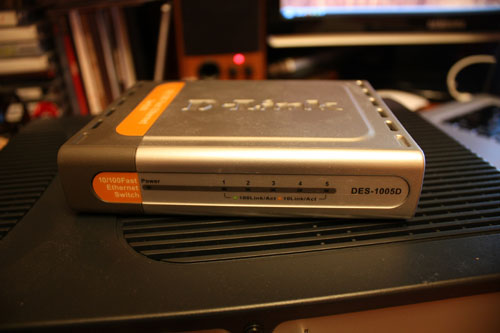 The back of the console with the HDD looks like this:

In addition to the set-top box with the recording function, there is a set-top box without a hard disk, which, in connection with this, does not support part of the functions, but costs less: when renting and when buying.

Externally, you can compare the consoles in the illustration from the user guide: In my opinion, purely externally, a prefix without an HDD looks much more modern and stylish.

Comparison table of the functionality of the consoles (on  the Beeline website in more detail): The set-top box is connected through the switch to the Internet and through the “tulips” to the TV.
Accordingly, to watch this digital television, you need to switch the TV to AV or HDMI mode and there already switch channels on the console.

The remote control is quite convenient, understandable. Nice green and red button illumination. Comfortable shape, nice to hold in your hand.

The control interface left a very good impression - everything is very beautiful, convenient, understandable. Clearly well thought out and worked out. All controls are made in the color scheme of Beeline corporate colors. The TV schedule is made in a style reminiscent of Google Calendar - in the form of a time line, which very conveniently and clearly displays the transmission grid. When switching channels, the information part appears at the bottom of the screen, which shows: channel number, channel name, name of the current program, time to its end, and the name of the next program. Here is the main functionality of the console (I have a console with a recording function):

I was not given the opportunity to evaluate the quality of HDTV, due to my lack of a suitable TV. Therefore, I can not give any comments on this subject.

So, among the pluses we have:

And among the minuses:


Thus, my first priority - replacing a TV tuner - this service does not solve.

Since it is impossible through a computer, we will watch through a TV.
I watched and watched all evening, played with new goodies, but after a few hours I realized that there was nothing in it that would make me unambiguously connect this service for money.

Yes, a lot of channels . But, as they recently said at Bor, “The more channels on the TV, the longer it takes you to understand that there’s nothing interesting anyway.” After a couple of hours in front of the screen, I fully realized this.

Yes, convenient broadcast control functionality . But how often will I use it? Now, if I missed something, I can easily find everything that I need in a record on the Internet. Even if it takes a little more time and it is not so convenient.

Yes,broadcast schedule on ALL channels . But I hardly need a schedule for all 125 channels. From strength, 2-3 main channels, the schedule of which can still be found on the same Yandex.

For myself, I did not find any particular need to connect this service. And even more so, buy a prefix. But this is my personal opinion, which I do not impose on anyone.
Maybe there are people for whom everything described will be for happiness.

Therefore, the very next day I wrote a letter to the support service with wishes, a description of all the problems that I encountered, as well as a request to take this equipment from me, because I refuse a test connection.

The answer came the next day. The following is a quote from the letter:

Wonderful!
Oddly enough, but I also work strictly on weekdays. And also strictly from 10.00 to 19.00. Now I am waiting for my May vacation in order to bring them their equipment, because I am not a sadist to send my wife with a box weighing more than 5 kg to go to their office on a weekday. And the workload itself doesn’t allow you to take time off from work.

Thus, we add another big one to the piggy bank of minuses : you will have to take time off from work and go on a weekday from 10.00 to 19.00 to bring them their equipment on their own if the Digital TV service does not suit you for some reason. The result of this whole story is as follows:

But this service has several disadvantages that I can push away potential customers. Among them: The
ability to connect only ONE TV.
The inability to connect television through a computer.
The presence of additional equipment for connecting the service, some of which is doubtful of the need (additional switch if you have your own router).

And the system of returning equipment by the client leaves a not very pleasant impression about the company: “We brought it in, connected it, and if you don’t like it, try and return it yourself, this is not our problem.”

For sim I want to take my leave, my first post in 2 years readonly on Habré on it is finished.
I would be glad if someone helped to decide on the connection of this service.

PS Advise in which blog to define this post?

UPD: Nobody advised anything, transferred it to IP-TV.