This article will focus on master's programs in South Korea (hereinafter simply referred to as Korea) in technical specialties, and in particular on Seoul National University , which in abbreviation is simply “SNU”, and the author would translate it into Russian as “ Seoul State University ” although it is called “National” on Wikipedia.

It is worth mentioning right away that all of the following is based on the personal experience of the author, and may not reflect absolute reality. If you ever have to come to Korea to teach, then you should consider that the academic life will depend on your choice of faculty and leading professor. At the same time, in Korea everything changes with cosmic speed, and in a couple of years, perhaps something will not be as described here.

If you mentally draw a horizontal line dividing the photo into two halves, then the entire lower part will be a university campus. 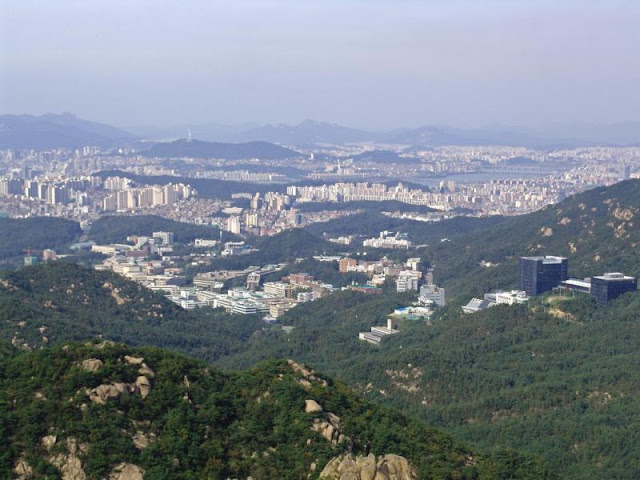 SNU is considered one of the most prestigious universities in the country. Moreover, as a state, the cost of training is significantly lower than in other prestigious, but private universities. Admission to Seoul University is a cherished dream of any Korean entrant, because for a lower tuition fee, a student will be able to guarantee a successful career, once in the right community. By the way, many high-ranking employees of such companies as Samsung, LG, Hyundai and other Korean giants were graduates of Seoul State University.

If you are a foreign student who has come to graduate school, then at the faculty of Electrical Engineering and Computer Science (EECS) for the first month of study, you will probably have to decide on a professor in the specialty you are interested in. By choosing a professor, you thereby become a member of his laboratory - a group of students, one large family. Since among the students of the laboratory there are both future masters and future doctors, the age of the participants in your laboratory can vary from 24 to 36 years. The number of foreigners, as well as the average level of English, will greatly depend on the chosen laboratory.

The laboratory looks something like this: professor, one or two girls, a foreigner and many Koreans (not the author in the photo). 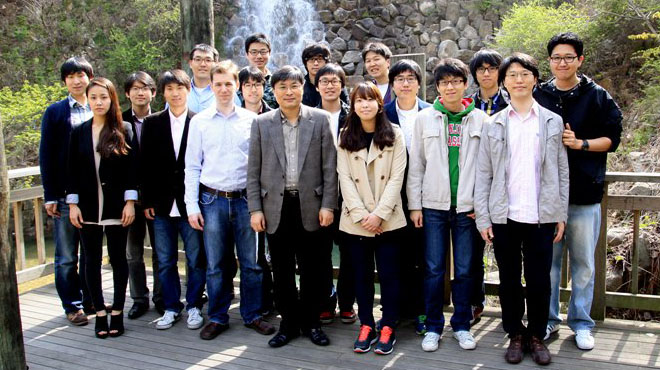 To Koreans, the professor usually pays a scholarship, which partially covers the cost of tuition at the university. Here is such a tricky system! Everyone seems to be left with their money, but because of the scholarship, students have not only a moral obligation to visit the laboratory every weekday from 10 a.m. to 6 p.m. Comparable to visiting the office and working part-time for a professor. Although theoretically you can do anything in the laboratory, Koreans mostly conscientiously study, discuss scientific articles, ideas contained in them, and carry out term papers and homework. Only during the lecture do you go to the next room or building. By the way, a vacation with Koreans in the laboratory is only a week away! Foreign students can count on two or four, depending on the kindness of the professor and their academic performance.

number of courses required for admission to the master's degree is only six, and this is two years! Three courses are usually taken in the first semester, and three in the second semester. Ideally, subjects can be chosen, and Korean students do just that. However, in truth, the choice of English courses is very limited. So for foreign students, there is practically no choice in their specialty. Personally, the author studied five technical courses, plus one about the principles of writing scientific articles in English. All courses were really useful, they included the obligatory attendance of lectures twice a week, homework and course projects.

It is worth noting such a "setup" as QT - qualification test, a qualification exam, which is more correctly called a test. However, this is a very important test - you have only two attempts to pass it, it’s not possible to become a master. This exam is a written solution of two problems to choose from more than twenty on different topics. Most topics are completely unsuitable, so the real choice will consist of two tasks in a bad case and three or four in a good one. According to the author, 20-25% of students cannot pass the test on the first try.

But let us return to the main task of the students of the laboratory, which is the writing of scientific articles, and on their basis a diploma. Under this important matter, two full semesters of the second year are assigned. The process of finding ideas for an article on the example of our laboratory looked something like this. A student searches for articles on topics of interest published at prestigious international conferences using Google Scholar. He then reads the found articles and tries to propose a small idea that could improve productivity or efficiency. Then the idea is made out in the form of a presentation and shown to the professor at one of the regular meetings of the entire laboratory with the professor. If the idea is approved, then for the experimental data a software simulator, or an embodiment in hardware, is implemented. If all goes well,

Usually, professors can more or less speak English, Korean students, in principle, too. Specifically, the author’s professor spent a lot of time in the USA, and accordingly spoke English without any problems at all. At the same time, understanding the importance of English for scientific work, he encouraged his students to devote themselves to studying the language at least half an hour a day. However, it’s still easier for Koreans to correspond and speak Korean at meetings, so a lot of useful information passes by you.

There are Korean courses at the university, and their attendance can, in principle, help in everyday life, but to learn to such an extent as to communicate on professional topics is practically impossible. Although known and an exception among friends of the author.

In the end, I will say that studying in Korea was a useful experience that allows you to look at many things differently. In the comments I will be happy to answer your questions.

PS I will add unobtrusively that you can read about some aspects of Korean life on my blog.