AlphaZero again beat Stockfish in a match of 1000 games

Last December, a wave of news about the incredible power of the new chess engine using artificial intelligence AlphaZero company DeepMind. Today they released amazing results of the updated version of this engine.

The results again leave no doubt that AlphaZero is one of the strongest chess engines in the world.

AlphaZero also outplayed Stockfish in a series of parties with unequal time control, defeating the traditional engine, even with a handicap in time by 10 times.

According to DeepMind, in additional matches, the new AlphaZero outperformed the “latest development version” of Stockfish of January 13, 2018, showing almost identical results, as in the match against Stockfish 8.

According to DeepMind, their machine learning mechanism also won all matches against the “Stockfish version” which uses a strong debut book. ” Adding the debut book seems to have helped Stockfish, who finally won a significant number of games when AlphaZero played black, but not enough to win the match.

The results were published in an article in the journal Science and presented to selectedchess media .

The match in 1000 games was held in early 2018. In the match AlphaZero and Stockfish were given three hours of each game, plus a 15-second increment per turn. This time control seems to make obsolete one of the biggest arguments against last year's rezutats, namely, that in 2017 one-minute time control per turn was a strong advantage for AlphaZero.

With three clocks plus a 15-second increase, this argument does not make sense, since this is a huge amount of playing time for any chess engine. In unequal time games, AlphaZero dominated even at a 10-to-1 time ratio. Stockfish began to win only at a 30-to-1 ratio.

The results of AlphaZero in games with unequal time show that it is not only much stronger than any traditional chess engine, but also uses a much more efficient search for moves. According to DeepMind, AlphaZero uses a Monte Carlo search and studies about 60,000 positions per second, compared with 60 million for Stockfish. 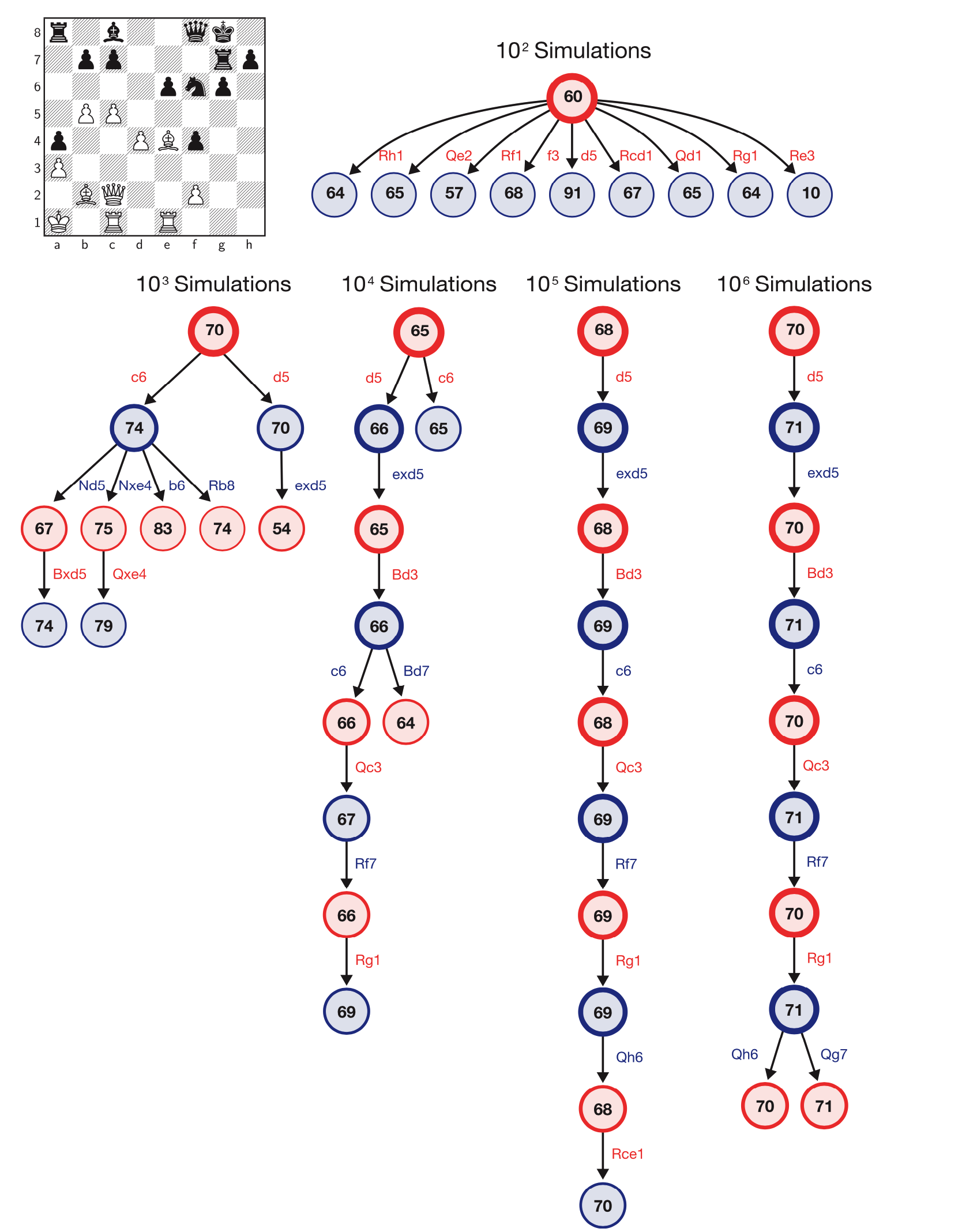 According to the article, the updated AlphaZero algorithm is identical in three difficult games: chess, shogi, and go. This version of AlphaZero was able to defeat the best computer engines of all three games after several hours of self-study, starting with simple rules of the game.

DeepMind released 210 games from the match, which you can download here .

The new version of AlphaZero taught itself to play chess, starting with the rules of the game, using machine learning methods to constantly update their neural networks. According to DeepMind, 5,000 TPU (Google Tensor Processor, a specialized integrated circuit for AI) were used to generate the first set of games for independent play, and then 16 TPU were used to train neural networks.

The total training time in chess took nine hours from scratch. According to DeepMind, the new AlphaZero required only four hours of training to surpass Stockfish; in nine hours, he was far ahead of the world champion among chess engines.

For the games themselves, Stockfish used 44 processors, and AlphaZero used one machine with four TPUs and 44 processor cores. 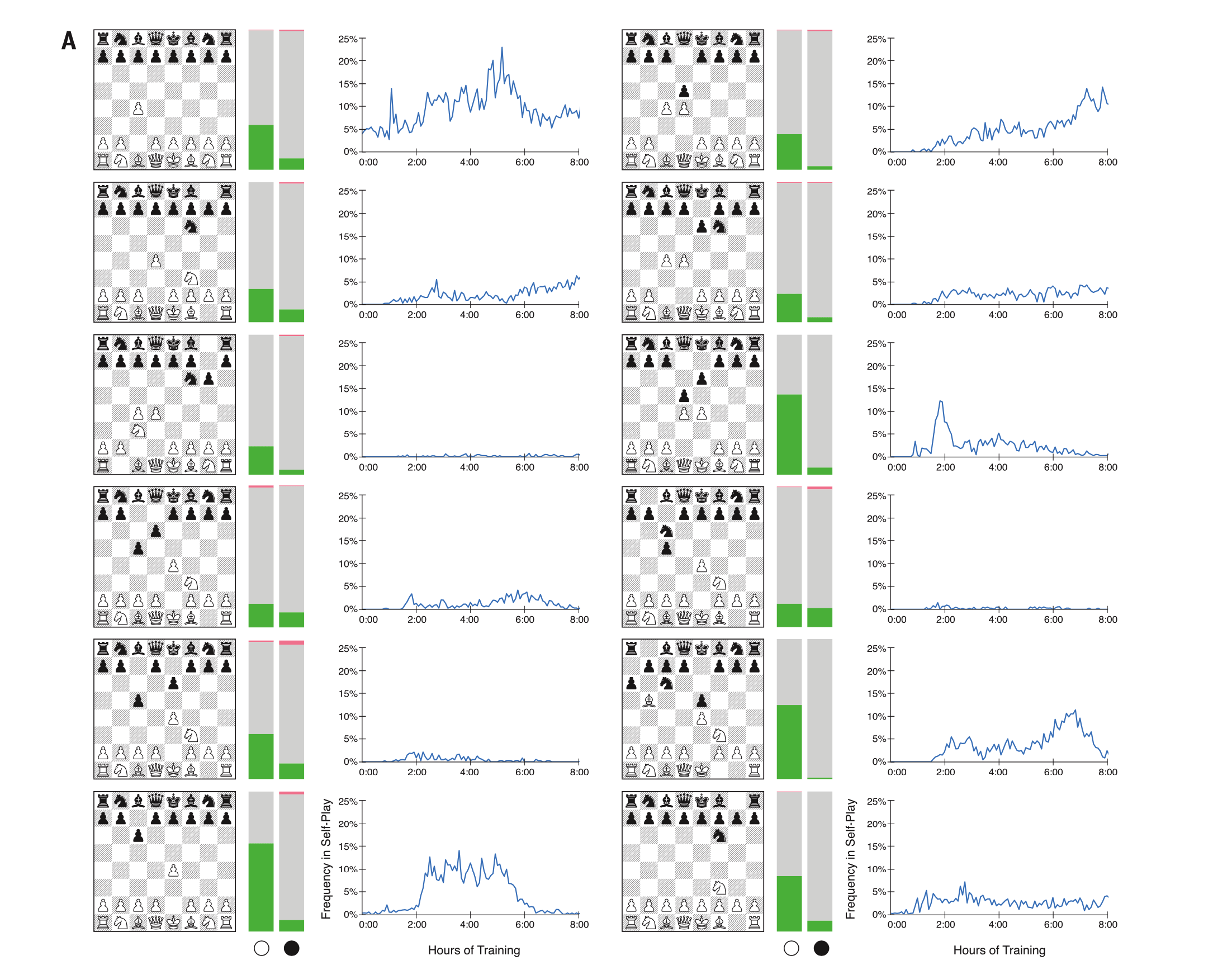 AlphaZero vs. Stockfish results in the most popular debuts. On the left, AlphaZero plays white; on the right - black.

DeepMind themselves noted the unique playing style of their program in the article:

“In several games, AlphaZero sacrificed figures for a long-term strategic advantage, suggesting that it has a position-based assessment that is more context-dependent than the estimates based on the rules used in previous chess programs.” said DeepMind researchers.

AI also emphasized the importance of using the same version of AlphaZero in three different games, advertising it as a breakthrough in general game intelligence:

“These results bring us closer to fulfilling the many-year ambitions of artificial intelligence: a common gaming system that can learn to master any game,” said DeepMind researchers.