Ask Ethan: if light shrinks and expands with space, how can we detect gravitational waves? 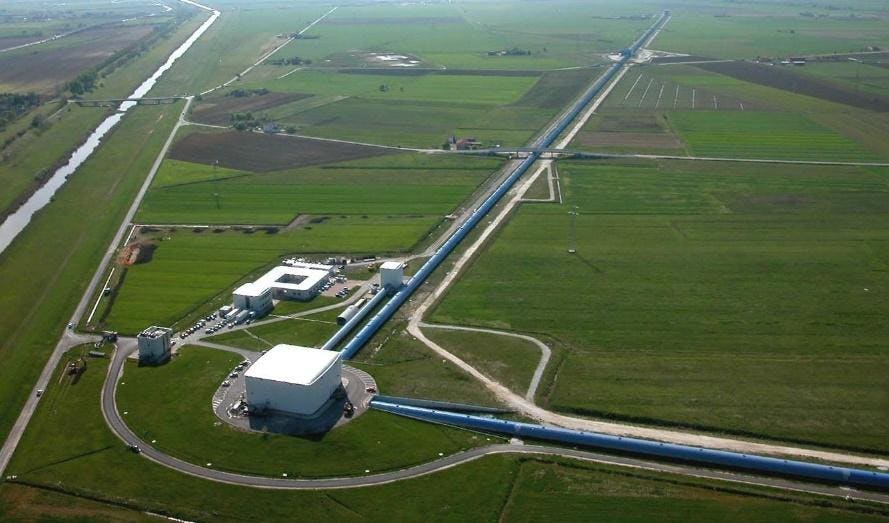 Aerial view of the gravitational wave detector Virgo, located in the municipality of Cascina near the city of Pisa in Italy. Virgo is a giant Michelson laser interferometer with 3 km long arms, complementary to two identical LIGO detectors 4 km long.

Over the past three years, mankind has a new type of astronomy, different from the traditional. To study the Universe, we no longer just catch light with a telescope or neutrinos with the help of huge detectors. In addition, for the first time, we can also see the ripples inherent in space itself: gravitational waves. LIGO detectors , which Virgo now complements , and will soon complement more KAGRAand LIGO India, have extremely long shoulders that expand and contract when gravitational waves pass, producing a detectable signal. But how does this work? Our reader asks:

If the wavelengths of light stretch and shrink together with the space-time itself, how can LIGO detect gravitational waves? After all, they expand and contract the two arms of the detector, so the waves inside them should also expand and contract. Will not the number of wavelengths laid out in the shoulder remain constant, as a result of which the interference pattern will not change and the waves cannot be detected?

This is one of the most common paradoxes that people imagine reflecting on gravitational waves. Let's see and find a solution for him! 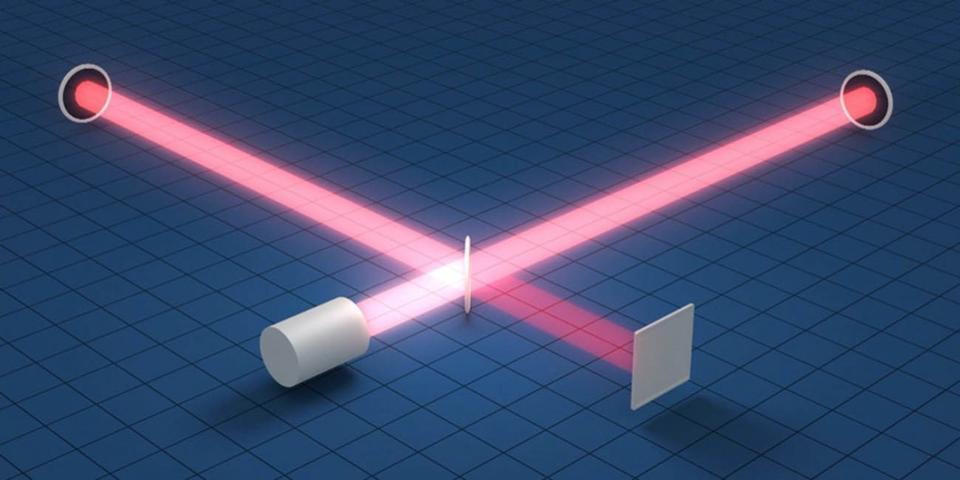 In fact, a system like LIGO or LISA is just a laser, the beam of which passes through a splitter, and goes along the same perpendicular paths, and then converges again into one and creates a picture of interference. With the change in the length of the shoulder and the picture changes. 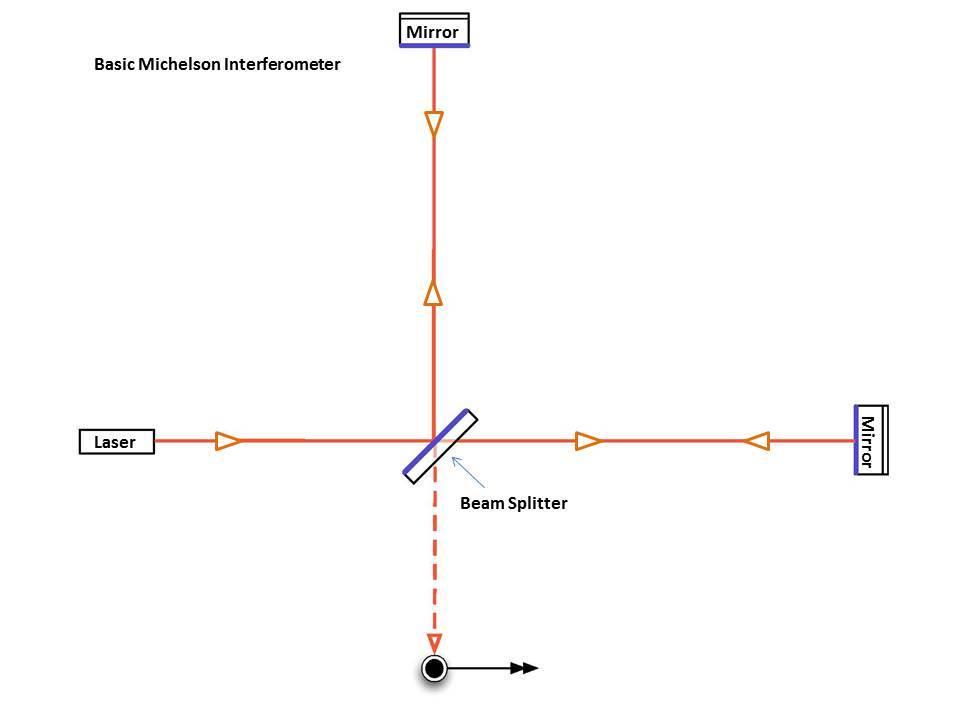 If the wavelength remains the same, and the speed of light passing through each arm does not change, then the light moving in perpendicular directions will arrive at the same time. But if in one of the directions there is a head or tail wind, there will be a delay with arrival.

If the interference pattern does not change at all in the absence of gravitational waves, you know that the detector is configured correctly. You know that you have considered the noise, and that the experiment is arranged correctly. It is precisely this task that LIGO has been fighting for almost 40 years: over an attempt to correctly calibrate their detector and bring the sensitivity to a point where the experiment can recognize the true signals of gravitational waves.

The magnitude of these signals is incredibly small, and therefore it was so difficult to achieve the required accuracy. 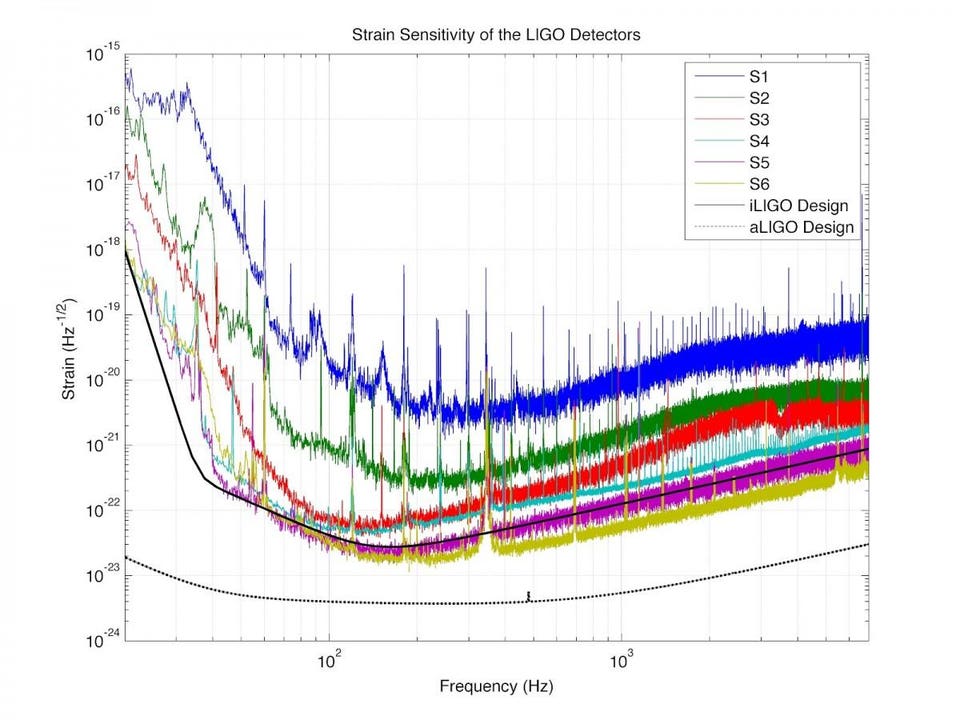 But having reached the desired, you can already begin the search for a real signal. Gravitational waves are unique among all the different types of radiation appearing in the Universe. They do not interact with particles, but represent the ripples of the very fabric of space.

This is not a monopole (transfer of charge) and not a dipole (like oscillations of electromagnetic fields) radiation, but a form of quadrupole radiation.

And instead of coinciding in phase electric and magnetic fields, which are perpendicular to the direction of the wave, gravitational waves alternately stretch and compress the space through which they pass, in perpendicular directions.

Therefore, our detectors are arranged exactly like this. When a gravitational wave passes through a LIGO detector, one of its shoulders contracts, and the other expands, and vice versa, giving a picture of mutual oscillation. The detectors are specially arranged at angles to each other and in different parts of the planet, so that regardless of the orientation of the gravitational wave passing through them, this signal does not affect at least one of the detectors.

In other words, regardless of the orientation of the gravitational wave, there will always be a detector in which one arm shortens and the other lengthens in a predictable oscillatory manner when the wave passes through the detector.


What does this mean in the case of light? The light always moves at a constant speed c, which is 299,792,458 m / s. This is the speed of light in a vacuum, and inside the shoulders of LIGO there are vacuum chambers. And when a gravitational wave passes through each of the shoulders, extending or shortening it, it also extends or shortens the wavelength of the light inside it by an appropriate amount.

At first glance, we have a problem: if the light is lengthened or shortened along with lengthening or shortening of the shoulders, then the overall interference pattern should not change when a wave passes. So tells us intuition. 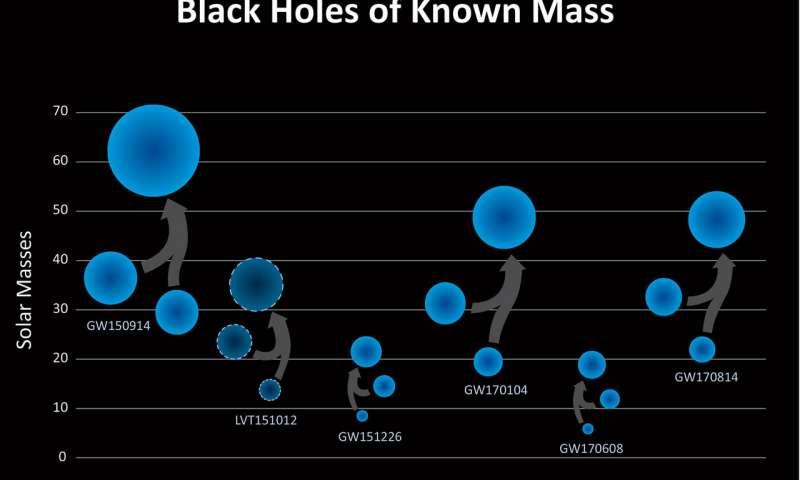 Five black hole-black hole fusions discovered by LIGO (and Virgo), and another sixth signal of insufficient significance. So far, the most massive of the BHs observed in LIGO, before the merger, had 36 solar masses. However, there are supermassive black holes in galaxies, with masses exceeding the solar one in millions or even billions of times, and although LIGO does not recognize them, LISA can do it. If the frequency of the wave coincides with the time that the beam spends in the detector, we can hope to extract it.

But it does not work that way. The wavelength, which strongly depends on changes in space when a gravitational wave passes through it, does not affect the interference pattern. It is important only the amount of time for which the light passes through the shoulders!

When a gravitational wave passes through one of the shoulders, it changes the effective length of the shoulder, and changes the distance that each of the rays must pass. One shoulder lengthens, increasing the time of passage, the other shortens, reducing it. With a relative change in arrival time, we see a pattern of oscillations, recreating the shifts of the interference pattern. 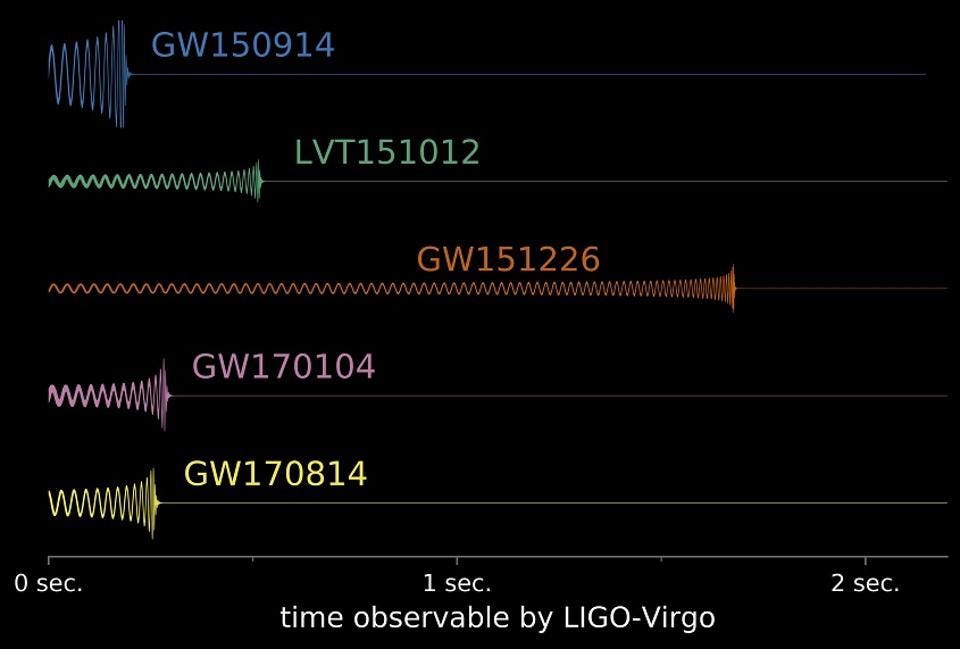 The figure shows a reconstruction of four defined and one potential (LVT151012) signal of gravitational waves detected by LIGO and Virgo on October 17, 2017. The most recent black hole detection, GW170814, was done on all three detectors. Pay attention to the shortness of the merger - from hundreds of milliseconds to 2 seconds maximum.

After the reunion of the rays, there appears a difference in the time of their journey, and, consequently, a detectable shift in the interference pattern. The LIGO Collaboration itself has published an interesting analogy of what is happening:

Imagine that you and a friend want to compare how much time you have taken the path to the end of the interferometer arm and back. You agree to travel at a speed of a kilometer per hour. As if the laser beams LIGO, you are strictly at the same time departing from the corner station and moving at the same speed. You must meet again strictly at the same time, shake hands and continue moving. But, let's say, when you have gone half way to the end, a gravitational wave passes. One of you now needs to go a longer distance, and the other less. This means that one of you will return before the other. You stretch your hand to shake a friend's hand, and she's not there! Your handshake was prevented! Since you know the speed of your move, you can measure the time it takes for your friend to return, and determine

When you do this with light, not with a friend, you will measure not the delay in arrival (since the difference will be about 10 -19 meters), but the shift in the observed interference pattern.

Yes, indeed, the light experiences a red and blue shift as the gravitational wave passes through the space it occupies. With the compression of space, the wavelength of light is also compressed, which makes it bluer; with stretching and the wave is stretched, which makes it redder. However, these changes are short-lived and unimportant, at least in comparison with the difference in the length of the path that the light must travel.

This is the key to everything: red light with a long wave and blue from a short one spends the same time to overcome the same distance, although the blue wave will take more crests and dips. The speed of light in a vacuum does not depend on the wavelength. The only thing that matters for the interference pattern is how far the light had to go. 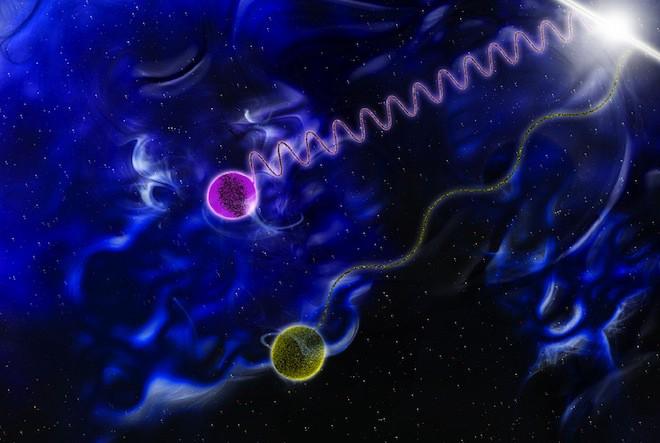 The longer the photon's wavelength, the less its energy. But all photons, regardless of wavelength and energy, move with the same speed: the speed of light. The number of wavelengths that is required to cover a certain distance can vary, but the time to move the light will be the same.

It is the change in the distance that light travels when a gravitational wave passes through the detector that determines the observed shift in the interference pattern. When a wave passes through a detector, the shoulder is extended in one direction, and shortened simultaneously in the other, which leads to a relative shift in the length of the paths and the time it takes for the light to pass through them.

As light travels along them at the speed of light, changes in wavelengths do not matter; when they meet, they will be in one place of space-time and their wavelengths will be identical. What is important is that one ray of light will spend more time in the detector, and when they meet again, they will already be out of phase. This is where the LIGO signal comes from, and that’s how we detect gravitational waves!

More articles on the popular science topic can be found on the Golovanov.net website . See also: why day animals began to turn into night animals ; why not everything that is called a star is actually stars ; what is the meaning of life ; a series of articles on cosmology " Ask Ethan ".

Now you can support the project through the Patreon automatic subscription service !